I am requesting a feature for the eDrive app that syncs files and folders between cloud and device. Currently the list of synced directories is as follows: 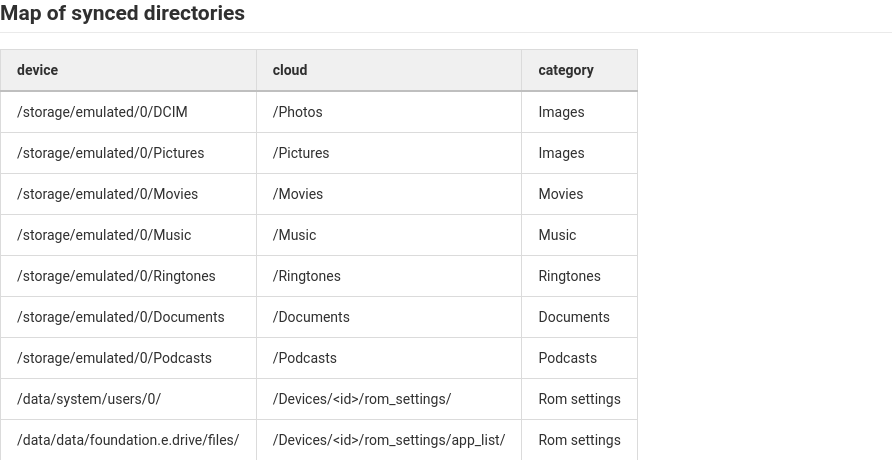 In this list I’d like to add some folders used by other apps and I’d also like to remove the DCIM / Photos directory as a small 4k video recording these days can easily be a couple of GB in file size and I don’t want to crowd up my cloud with the storage quota expiring because of unimportant video recordings that I would delete later.

Basically, the list of synced directories should be made available to the user to choose and decide. I would be happy to help in anyway I can.

Hope that helps - at least for now

@ralxx I’m not sure but if you are talking about this: 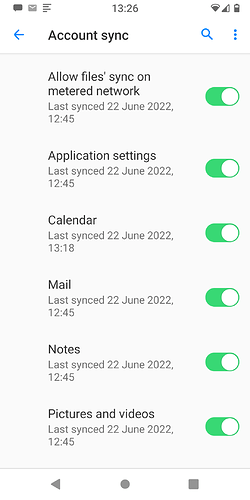 I think a much better approach would be to implement something like what Nextcloud app does with it’s auto-upload feature where user can selectively choose the folders they want to sync with cloud. I could just use the Nextcloud app but it has it’s own issues and has not been able to implement the two way sync which by the way eDrive app is able to do albeit with very rare and occasional issues. The only thing eDrive is lacking right now is selectable folders instead of hard-coded directories.

Please let me know if you find any temporary workaround to at least stop syncing my Camera folder (/storage/emulated/0/DCIM). I don’t always have unlimited internet connectivity and don’t want to waste storage or data quota uploading large videos.

I have always found switching off Pictures and videos will stop DCIM syncing.

I would also like to see your suggestion of being able to specifically chose folders to sync. My experience, @SayanChakroborty, suggests that the switches seen in your image actually control

I’m using “Documents” as a “root directory” for files I want to sync. For example:
/Documents/Docs
/Documents/Bkps/ (app’s config files, feeds/opml exported, keepassdx)
/Documents/Books
/Documents/VoiceRecorder (I use one that allow me to choose the destination folder [https://f-droid.org/en/packages/com.github.axet.audiorecorder/], and set to this one)
… and so on.

To avoid the problem with syncing DCIM, try to create another folder in android root folder, like “myphotos”, and set this as destination folder in the camera app. I thing it will not automatically sync it, but you will also not sync any pictures. Maybe if you use two diferent camera apps, one for videos and one for pictures with destination folders set properly, you could have just your photos synced.

Anyway, a fair and useful request in my opinion.

I thought about this issue a long time ago but never posted a request.

My Axon 7 is a multibooter with several ROMs. It has an SD card where I keep music and videos. I installed /e/ 0.1 on it. Later I got the /e/ account and added storage space. Later I installed /e/ on the Essential PH1 mata which has no SD card. Copied all my music and vids to it. That stuff synced to ecloud which later synced back to the Axon which then caused me to run low on internal storage (not to memtion the redundancy). I turned off the syncing of Photos and Videos and deleted the files. It was awhile before I realized no documemts were syncing.

Fast forward to “today”, the Teracube has replaced the Axon. It also has an SD card where the multimedia files live thus the same situation again. I need Documents synced but not the other stuff.

I sync documents from the PC desktop via the Nextcloud client but they don’t get synced to the Teracube since Photos and Videos is toggled off.
The Nextcloud mobile client does not have/do proper 2-way sync. There’s a thread about that in the NC forums. Folks recommend all kinds of sync methods (like syncthing) but as one person put it, you need a client that fully supports Nextcloud/ownCloud cataloging. This way deletions, modifications, etc. are properly handled.

AutoSync by Metactrl(?) is the best bet (tried it and it works great) but it is trialware and can only be paid or subscribed via Google Play.
FolderSync (Pro), which was already on another device to sync some office docs to ecloud, was the next best solution. I now use that to sync the Teracube’s Documents to/from ecloud. I’d rather not use a third-party sync app though.

If nothing else I think Documents should be on a separate sync channel. So yeah, they should all be separate IMO (Documents, Photos/DCIM, Music, Videos/Movies, Pictures).

Side Note: FolderSync Pro is one of those apps you can buy directly from the developer.

The Nextcloud mobile client does not have/do proper 2-way sync.

Can you give any more information on this? I’ve been using the NextCloud app for a while (on /e/OS and LineageOS ROMs), and I’ve not noticed any problems with file sync

Admittedly I was working off some old info at first. It’s not that 2-way file syncing doesn’t work but proper folder syncing via the mobile client does not. Automatic propagation of content changes with no manual intervention. A long standing issue that has yet to be resolved it seems.

On their git, this issue opened in 2016, is still open. Even IzzySoft, earlier this year, voiced his displeasure at the state of things.

I’d have to do a full set of tests to see what’s what. There’s a sync toggle under Nextcloud’s account entry in the ROM. Guess that should be on, too.

It’s not that 2-way file syncing doesn’t work but proper folder syncing via the mobile client does not. Automatic propagation of content changes with no manual intervention.

That’ll be why I have not noticed any problems: my usage model is not to keep the content of the phone fully in sync with my NextCloud folders (which would take up more space than I have available on my phone). I need:

The NextCloud app does that pretty much perfectly for me