Hello,
i have a problem with the application “Radio France - podcasts & direct radio”. Installation is ok (with apk from raccoon and apkpure), but, when i start the app, it’s crash.

Someone has tested this app ?

Same problem for me on FP2.

@TheMajorTom @Pragmethik have you faced this issue while using Radio France app on LineageOs4MicroG ROM? Just wanted to confirm if this is a MicroG issue. You could raise an issue under https://gitlab.e.foundation/groups/e/apps/-/issues with logcat’s to help the team debug the issue.

Yup it seems to be the same problem.

Installed it from /e/ app store and it does crash.
Pitty to have non /e/ compatible on the store.
Can be a trouble for non beta users…

There was a previous discussion on this also with a few findings that may or may not be the reason for the crashes.

The microG dev, mar-v-in, has been working on all kinds of fixes and bugs. Looks like an update is on the horizon. microG test builds are now available for testing. I may setup another ROM with it and retest the France media apps and see how it goes. Glad I have a day off tomorrow.

I mentioned I was going to test the France radio apps with the microG test builds that were out. Due to signature mismatch I assumed those builds were installable only over the NanoDroid patched microG where the French apps worked anyway.

Well, some good news is definitely here. After a really long wait, microG has been officially updated to 0.2.7. So I setup a fresh ROM to test (crDroid Nougat) using 0.2.6. Reconfirmed that the Radio France apps do crash.
Latest microG is supposed to be available via F-Droid but the store says the signatures don’t match. No prob. I manually replaced the old GmsCore with the new and made sure all was good.
Then tested three of the Radio France apps (Fip, Inter, and Radio). They all started up and ran just fine.

Since microG 0.2.7 is official and fixes a number of issues (including the login issues when using webview v74+) there’s no doubt it’ll make its way into Lineage_microG, /e/, and various microG installers.

Now that the latest /e/ builds have microG 0.2.7 you can try out the Radio France apps. Just tested two of them and they seem to run fine.

Radio France should be working now. Just downloaded and tested on a test Pi/e/ build - with the latest MicroG update and it works.

It doesn’t work on my /e/ pre-installed smartphone, received thursday…

My suggestion: Use for now Aurora, it is an open source app store downloadable from F-Droid, where you can all apps from Google Play Store (including the Radio France app), but you may do that anonymously. Hope that helps.

I confirm this app is working when downloading it from elsewhere. Alternatively, on /e/ appstore you can download the other Radio France apps (France inter etc…) and they are working fine.

Since july 2019 i use the app “Radio info France” for direct and live. It works fine. Just one problem : no search with keyword…but no tracker or ads… 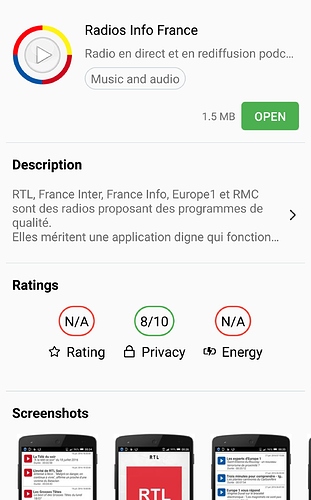 I don’t really see the point in adopting /e/ if you’re using apps with 28 trackers that are just terrible for privacy when other apps do the same thing and just work without spying on you.

In this case, I use Radiodroid and Antennapod (both are available in the Apps store as well).