I’m having trouble with a Samsung S9, but I’m SO close.

A troubleshooting post by @Ingo_FP_Angel suggested including my device info and the logfile, so I did, as well as the steps I’ve taken and where I’m stuck. I suspect a smart person might scroll down to the very bottom and quickly find the solution with the 4 latest files I managed to send to the phone.

Thanks very much!
Holly ~

Samsung S9
Android V9
Phone has been factory re-set and is blank. There is no phone sim or storage sim installed, it is connected to wifi and I disabled any Google security stuff that was trying to stop me.

I can get through the entire Easy Install until it asks for the driver.

I downloaded both FP3 and GS90 and can see them in dowloads, but
Windows asks on each what, program I want to open them with.

I switched computers, reset to factory again and restarted in Fastboot, which *seemed to work, though the phone says it is in Safe Mode and the device manager doesn’t have a warning icon.

In the Windows device manager I can get to the Samsung drivers, but the FP3 file is nowhere to be found, only the GS290, but it won’t let me switch to it.

“You already have the best driver, yada”

So I “sent” the two driver files (FP3 and gs290) to the phone and they are there when I access it through Samsung My Files and Internal Storage, but they are .zip files and it asks how I want to open them.

I was also able to “send” a file from the download to the phone called:

That is the only one that isn’t a zip file, but again, it wants to know how I want to open it.

When I access the phone via Windows (Steps 4-10 of Solution 2 Manual Install. The FP3 file is not there, only the GS290. When I expand that the only options is:

If I try to select that one (the only option) the next screen says, “best drivers already selected” SAMSUNG Android ADB Interface

Below that is a file called:
amd64 which produces the same result.

I then tried re “sending” the unzipped GS290, and now have many new files on the phone, all of which look promising, but also need to know what program to use to open them:

Hope someone can help! Thanks!!

A Windows driver can be installed in many ways if you have the .inf file, 2 of them:

What a strange idea…

[HOWTO] Install /e/ on a Samsung smartphone with Windows easily
(install TWRP, then if needed, use it to install recovery-e)

une version en français est disponible (1) Download an /e/OS build (2) Download recovery-e or TWRP (3) install the appropriate Flashing Tools (4) Check the communication between the PC and your smartphone (5) allow “Non Vendor OS” to be installed on the device (6) Unlock the Bootloader (7) Flash a custom recovery manager on your device (8) install /e/ from your computer, using the “adb sideload” method or (9) Install /e/ without computer using the “Storage Device” method (10) post i…

I found one .inf file and was able to install it, but when I right click on the computer at the top of the tree, the only option is “scan for hardware changes” – any other ideas? Tks!

Thank you for your help(s) – it’s a nice community, but the model # of my S9 doesn’t appear to be compatible, but at least now I have a much better grasp of how to do it… and it may also explain why the Easy Installer went perfectly until the last screen that said my phone wasn’t detected (and I suppose why I couldn’t install the drivers).

When I pre-checked it for compatibility at the e.foundation Smartphone Selector, I just saw Galaxy S9… I didn’t realize until tonight that hovering over it shows that only CERTAIN S9s are compatible. The Codenames on twrp don’t match at all, so not-compatible is how it appears to me anyway.

I have a Motorola Edge I can try it with – I was just really trying to avoid using a Google product… I didn’t realize Google had bought Motola, which is a shame. More likely, though, I’ll probably just buy another re-furbed Samsung that is compatible.

Thanks again, I’ll be back when I decide what to do.

That’s weird, I can see it from Windows XP to Windows 11 … 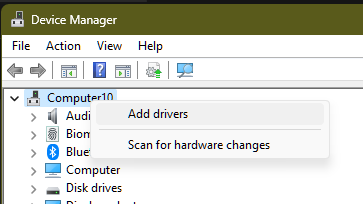 I’m having trouble with a Samsung S9

The following steps apply to all PCs running Windows OS. You need the driver only if you are developing on Windows and want to connect a Samsung Android device to your development environment over USB:

After the driver installation, connect the Galaxy S9 to the PC via USB cable and open the Windows command prompt (Administrator), navigate to the directory where you previously installed the …

Finding out your device code name

adb devices
[If the answer is valid, the device serial number is displayed here]

adb shell
[If the answer is valid, the device codename is displayed here - in the case of Galaxy S9]] starlte