I’m using a Pixel and my battery is unchanged

Poco X3 Pro user here, no battery issues or overheating issues for me.

I’m living exactly the same experience on my S9+ : battery drain, MicroG takes 1/3 of the power, and I can’t charge like I did before : one night on a single usb port was enough and it’s not anymore. I can’t spend half the day without plugging in somewhere. I also felt a disturbing heat in my pocket sometimes.
So I’m not totally insane ! :o

Anyway I’m still an enthusiast /e/ user since 2018 and just waiting for a relieving update.

Thanks for your report. Seem to be a mostly S9 issue. I’m on a S8 still waiting for the 1.0 release. I was actually going to upgrade my hardware to an S9 but after reading this I’m not quite sure anymore.

An issue has been created around the battery drain being reported in specific devices post v1.0.

Pl add your device name and details of the issue you are facing in the issue.

thanks for creating that issue. I use a FP3+, e/OS/ was pre-installed. After the upgrade to v1.0 I noticed performance problems. The UI is slow when changing browser tabs, changing apps, or even writing a text. I could not notice a heavy battery drain, but the performance is worse than before. Is this kind of issue already known to you?

Thanks, I’ll describe all I can in this topic.

Can’t answer because my account is new, so I put it there :

My phone is a Samsung Galaxy S9+.

After that, I quickly observed a massive battery drain.
With or without Advanced Privacy, behavior seems strictly the same.
MicroG is the most consuming, every time I look at the battery monitor.
Even at night, with absolutely no applications running (I even forced them off), the estimated charging time was about twice the usual time.
But it’s not as massive all the time. This morning, I had a few hours of normal consumption : with everything off, it lost a few percents. Then it began draining it again for the rest of the day.

I had some unusual heating with no reason : in my pocket, no apps, stand-by mode with the screen off (I checked it), the phone was hotter than it should and usually is. Once, when it got hot, the battery use graph was reset, although the phone was still in my pocket and did not get any power source.

I hope this will be useful. Please let me know if you need some specific test.

Pl share the points in the gitlab issue as well

In the German part of this forum, someone used adb and found out that some file seems to be read again and again because of an error.

Another question : did you get a brightness reduction since the update ?
Now I have to get up to about 75% if I want to have as much brightness as I got before with 50%.
On the first boot of the V1 the screen was much darker than before, and it’s still like this.

Hi everyone,
I’m on FP3+ and I’m experiencing the same issues as you Jayky, since yesterday when I installed the v1.
Also like @alice_m there’s a delay for the screen to light up when pressing the unlock button.
Besides that, this new os really have some great improvment and my bank app works again !
Hoping a new version will come out soon to fix this performance problems !

I’m also experience a massive battery drain on my S9+. Advanced privacy is off.

The same for me since V1 update. Huge battery drain on FP3 ( Advanced privacy is off) 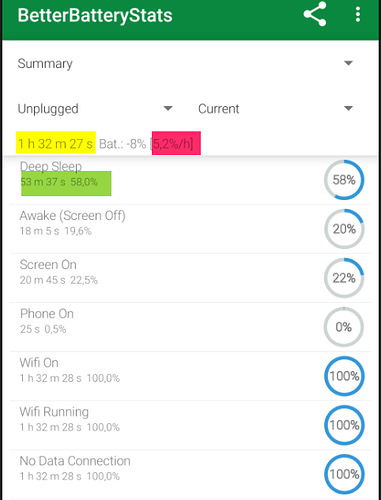 Please e/Os team a fix for it please

have the same issue even in flight-mode during the night with no open apps. The battery droped from 70% to zero. Am using a S9.

Advanced privicy I haven’t yet activated since the update.

Thanks for keep on working! Cheers

Hi, I have the same problem with my phone.

The phone jerks and I have the impression that the battery consumption has increased, so much so that even the body is warmer.

No issues noted with my Sony.