Hi @Sean, I cannot speak on behalf of the /e/Team but solely to the best of my knowledge and belief. As the s9+ continues to be supported on /e/OS and there are no plans to discontinue it, …

The s9+ is still supported on /e/OS and there are no plans on discontinuing it.

… the e-0.14-q version is only a matter of time. We must continue to exercise patience. But at least - the first step has been taken and the 8.1 Oero era is behind us.

Hello SuzieQ,
I have a Samsung S9+ from /e/store and would like my phone is updated to /e/OS Q,but I…’m not
technical and can’t update myself.Could you do it for me?Ofcource I pay for transport and pay you for the work.I would be very glad if you want.I know nobody to do it.
Let me something know.
Greetings Strosse

Hello @Strosse,
Instead of paying me for the upgrade, you may make a donation of any amount to /e/, e.g. here or here.

Money should not flow between our bank accounts. You are responsible for shipping costs there and back. We both commit to discretion and respect each other’s privacy.

If you agree, please PM (Message) me with your home address so I can quote you the cost of insured return shipping with online tracking.

Hope you got my emailaddress

If you can send an e-mail,I can reply and send you my personal information you need to send me the cost of sending the phone. 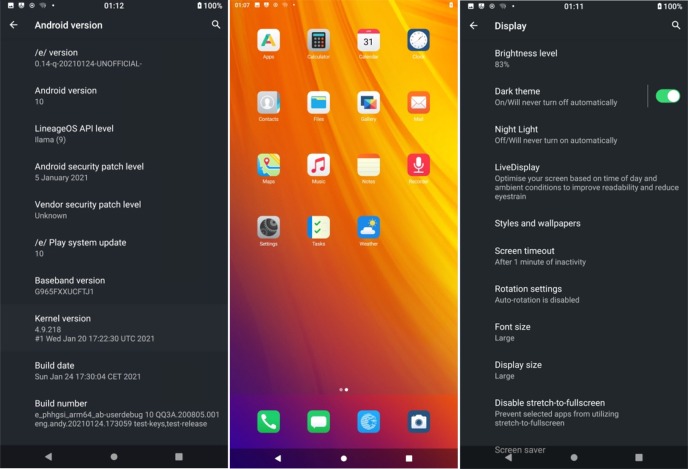 LeOS ‘R’ 20210202-RW-full-bvN also runs on the Samsung Galaxy S9+ ‘star2lte’, is completely ‘de-googled’ and without any Google Play Services, but with microG, F-Droid, DAVx5 and Calxy SeedVault Backup via Nextcloud instance.

The /e/ documentation Install /e/ on a Samsung Galaxy S9+ - “star2lte” talks exclusively about TWRP-Recovery, but not about eRecovery, a fork of Lineage-Recovery’s own development.

However, after the successful and straightforward installation of /e/ OS ‘Q’, eRecovery e-0.13 and no longer TWRP Recovery is installed on the S9+ without any indication. 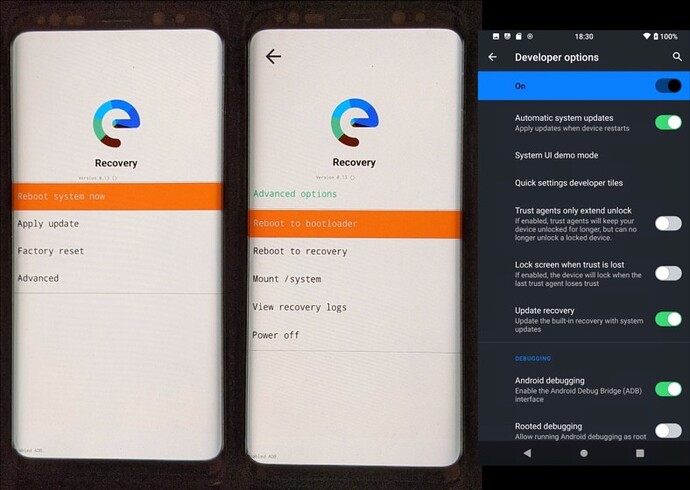 eRecovery is good for processing OTA updates and for a few simple additional tasks. However, the feature set is much smaller than that of TWRP Recovery.

How long will the Samsung Galaxy S9+ ‘star2lte’ still be officially supported?

How long will the Samsung Galaxy S9 still be officially supported? An article on SAMMOBILE talks about “Samsung will continue to provide security updates for another year. The Galaxy S9 and Galaxy S9+ are currently on a monthly cycle for security updates. They will eventually be downgraded to the quarterly cycle.” My sources are talking about not expecting the once premium devices to get a major upgrade to Android 11 yet. The Android 10 update with OneUI 2.5 that was distributed last year once …

@SuzieQ: can you forward me to a description how to install eRecovery on s9/s9+?

It’s strange: /e/ offers its lineage fork eRecovery in the same breath as the /e/OS ROM, but doesn’t talk about eRecovery and its installation in the /e/ documentation.

There are several ways to install eRecovery on a Samsung Galaxy. One easy way is via TWRP Recovery, which is recommended in the /e/ documentation.

Finally, for the sake of safety, confirm the installation by running “Reboot Recovery”. Now the Galaxy should boot into eRecovery and you can use it to install the /e/OS ‘Q’ for example.

@SuzieQ: thanks a lot for the information.

unfortunately, i have an /e/.shop S9 … .after installing Q through TWRP following the install guide it encrypted directly. with TWRP 3.5.2_9 i do not have access to the internal storage.

is there another way to install the erecovery.img over the existing TWRP?

on the other hand i could wait for twrp 3.5.2_10 is out, right? then your description shall work.

The custom recovery can be replaced like the OS. The /e/Recovery has compared to TWRP in lower in feature set, but it manages the OTA update flawlessly in the background (without possibly errant messages) and handles encryption well.

I test and use besides eRecovery and TWRP Recovery also SHRP SKYHAWK Recovery Project. It’s less known, but at least as functional as TWRP, can also handle ‘Magisk’ and ‘Treble’ and is visually appealing.

thanks for your explanation and information about additional recoveries.

in my case i want to use /e/recovery.
i first flashed TWRP, sideloaded /e/ image and overwrote TWRP with /e/recovery after just copied /e/recovery IMG file via win-explorer.
i do not know if this is the quickest way … but it worked

/e/ offers its lineage fork eRecovery in the same breath as the /e/OS ROM, but doesn’t talk about eRecovery and its installation in the /e/ documentation .

I think this omission might be the cause of some of my confusion. The rest of it can be explained by trying to use several outdated guides instead of one that is actually complete and current. This stuff changes so fast so I can understand the lag in documentation… especially within a dev community where information can turn to assumptions that live only in the heads of the initiated.

I can only assume by eRecovery you’re referring to these dev builds which feature a recovery image. The stable builds don’t have this and it’s like you said… It’s not mentioned here or here or here, or even here where it probably belongs. The best I could find was this discussion that can (presently) only be viewed using googles webcache. (It’s not on wayback)

I too have an s9 that shipped with /e/ running Android 8.1.0. So far I’ve been able to flash a stock Android 10 Rom but when I side loaded /e/Q I got error 7, and some explanations that aren’t making sense to me

One helpful user told me that I had to reboot to recovery in between wiping the system, and wiping the system and data partitions. I didn’t see that in the docs either. One guide says it’s mandatory to install this patch and another patch (no-verity-opt-encrypt-samsung-1.0.zip). The vendors side loaded ok but the other one related to encryption failed with error 1.

What I don’t know is:
1-Do I need to reinstall Stock rom using Odin or is there another way to install /e/Q?

2-Why does a stock rom need to be installed if it’s pretty much going to be blown away immediately using TWRP? Clearly installing the stock rom insures the sideloading of the /e/ zip file but I don’t understand the mechanics

3-Is the real reason why I went wrong because I didn’t use twrp recovery to (overwrite itself?) by installing the eRecovery variant?

4-Do I need to side load the vendors file and the no-verity-opt-encrypt-samsung-1.0.zip file that kept failing for me (I did re-reboot to recovery in between)

There’s no lack of places to get lost. Getting lost is the price to pay for knowledge and I’ve been paying over the last week. I finally feel like I’m close and that there’s just one or two pieces of info that I’m missing.

Update: I followed the upgrade instructions after a little break and saw this

Since my device was not encrypted (I think… since I didn’t encrypt it) I proceeded to sideload the /e/Q zip file.

It installed! Rebooted, Then said encryption unsuccessful…It said I needed to erase all data… ok nothing to lose at this point… It rebooted into TWRP and I saw an error but it went too fast.

So at this point… this is the furthest I’ve gotten.

1-Do I need to wipe/format/repartition or do anything manually?
2- Does the “no-verity-opt-encrypt-samsung-1.0.zip” need to be installed? If so… precisely when?

I re-ran the vendors zip file, rebooted into recovery, then tried to sideload the dm-verity and forced encryption disabler. It fails with error code 1 preventing me from booting into /e/ proper (I think).

I wiped the cache, rebooted to recovery and tried to sideload dm-verity again but like before it fails with error code 1.

Hi, else where I think you said you were using this phone in USA? I may be quite wrong … but you may need to consider if you are experiencing a Samsung Regional lock. There seems some uncertainty how this all works!

Thank you for taking the time to comment @aibd
I don’t know if this authoritative but: But I appear to be one of many with Error 1.

I don’t know enough to believe or refute what you say but does it mean anything that my S9 is an SM-960F purchased from the foundation and that I’m installing G960FXXSBETH2_G960FOXJBETH2_SFR (from sammobile.com) via Odin 3.14.4 and that my TWRP recovery is twrp-3.5.2_9-0-starlte.img.tar?

You got a European phone which has got round the USA cartel.

Things changed with pie, so do not rely on old stuff if thinking of upgrading to Android 10.

IMHO Android 10 mostly introduces increased “security” for them. What do you feel it will give you?

There’s no lack of places to get lost. Getting lost is the price to pay for knowledge and I’ve been paying over the last week. I finally feel like I’m close and that there’s just one or two pieces of info that I’m missing.

Hi @Kritischer . @aibd is having some fun. I am a newb compared to him. I have a couple of these star2lte’s up on Q but what a nightmare to get them there.

Can you tell me what your current RMM status is?

The reason I ask is after getting /e/Oreo installed (unlocked bootloader and TWRP installed) I had to flash a stock Q ROM. After doing this my RMM went back to “Prenormal” but I was able to get it to “Checking” after connecting the device to the internet and let the device connect to the Knox servers. From this point I enabled debugging and successfully sideloaded /e/ dev Q via TWRP & adb. I think you are almost there too simply because from my experience, once you get the bootloader unlocked and TWRP installed the RMM did not return to “Prenormal” permanently even after the flash from /e/Oreo to stock Q ROM.

Have you tried backing up then doing a clean install from the stock QROM > /e/Q, wiping /system, /data, /cache before the sideload?

2- Does the “no-verity-opt-encrypt-samsung-1.0.zip” need to be installed? If so… precisely when?

No, I don’t recall ever using this. Try without using it. I would try a fresh sideload after Factory Reset , then Format data / factory reset then wipe /system, /data, /cache

You can encrypt the phone from the Trust functionality in /e/ after flashed.