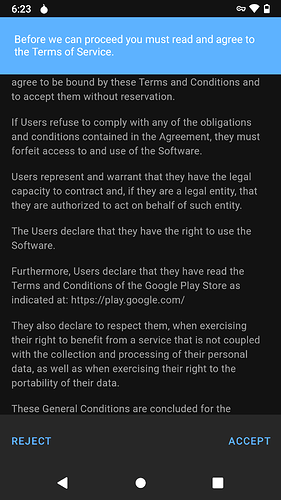 Don’t use App Lounge and uninstall it then?
But your argument is sensible of course. Most of the code of any given Android OS including /e/OS was written by Google anyway. So really degoogling means not using Android at all.

That’s strange.
I thought AppLounge Anonymised you when not using a Gmail account.
I’d like to have more informations about the privacy with AppLounge, and which data are given to Google Play (IP, mac adress,… ?).
I think I will continue to use Aurora and F-droid instead of AppLounge atm.

Android is built by Google on an obsolete Linux kernel, even the most recent versions of Android. This old Linux kernel under GNU public license makes the whole Google Android and especially the Play Store illegal software, all apps in the Play Store that are unavailable as APK download without a Google-account are illegal. This is the reason why billionnaire Google, though saying Aurora store is illegal, never goes to court against Aurora: Google would loose!
I’ve returned to a classical mobile phone (“dumbphone”) until the day essential applications work on a GNU/Linux phone without an Android layer. Pinephone64 with Manjaro linux is a possibility and maybe, if the EU Digital Identity and Wallet work on all mobile free OS’s, things will change in Europe. But untill that day I won’t use a smartphone.

this is disapointing. Part of the whole reason for using /e/ is not having to accept ridiculous terms of service. I use Aurore store some too, but try to avoid it for the same reason.

You could look into pinephone. They are a true linux smartphone.

Why would the Play Store be illegal software? I wish it was so that Google could finally be sued, but the AOSP code is freely available as the GPL license requires. The GPL license does not prohibit you from writing proprietary apps or extensions for an operating system or program that is licensed under the GPL.