It happened to me a few times that fans of LineageOS voice concerns and critics around /e/.
Is there any of you with sufficient technical understanding to explain in plain English how /e/ is different (better ?) than LineageOS ? 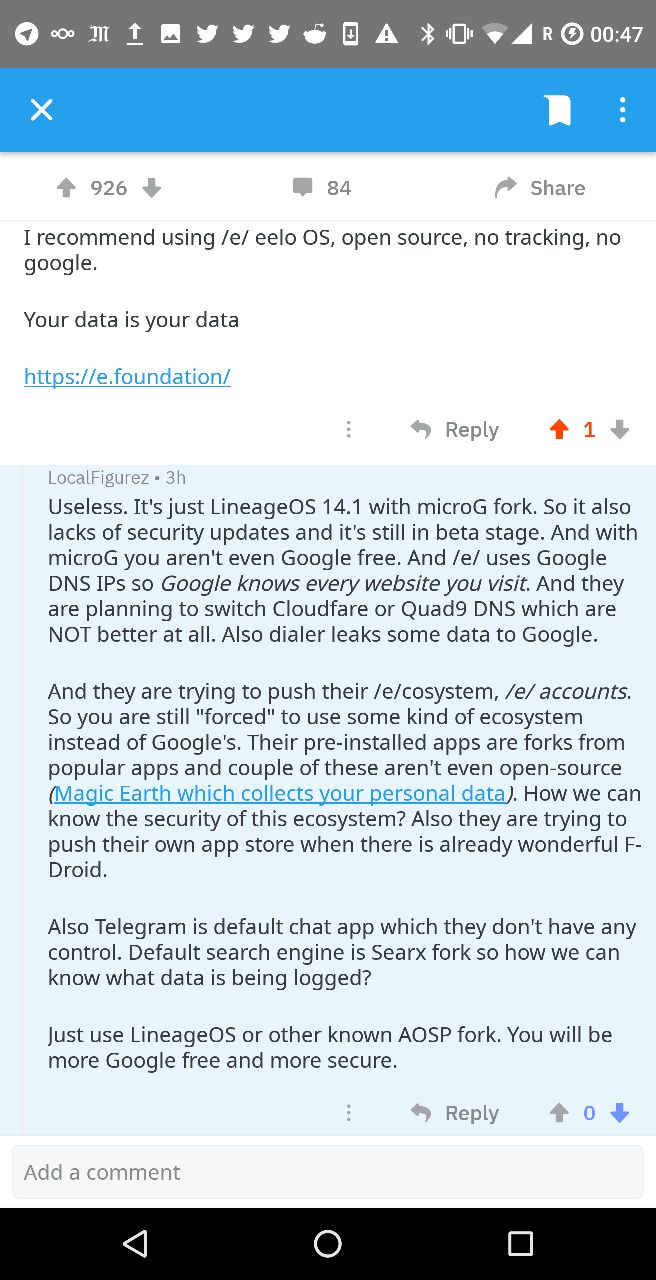 I believe the following post answers your question quite well:

We’re supporting a lot LineageOS and I don’t feel in any manner in competition with LineageOS because we do not folow the same goals. LineageOS is the heritage of CyanogenMOD and they have their own vision. The initial plan is to offer AOSP on many devices, and they are bringing some nice improvements at the same time. People with technical knowledge can reach a good level of privacy tweaking LineageOS for their own needs and that’s cool. On our hand, /e/ is not a low-level (understand “h…

It happened to me a few times that fans of LineageOS voice concerns and critics around /e/.
Is there any of you with sufficient technical understanding to explain in plain English how /e/ is different (better ?) than LineageOS ?

The post you quote is not far from the truth.
What e does is in a way what most people who use LOS do, take LOS as base and add apps that fit the need of a particular profile. Nothing wrong with that. What I find wrong with e is that, unlike other Android distributions based on LOS or AOSP which actually add a lot of improvements and extra features, they advertised a ground braking new OS and delivered just LOS, microG and some apps (packed as system apps, mind you) from F-Droid with e label on them without giving any credit to the actual developers.
And the e ecosystem. Once you want to fight an ecosystem gone bad like Google you don’t do it with yet another one, why should one trust you more then Google, just because you say so? (Funny thing is, some people do) Remember “Don’t be evil”?
In other words the strongest point of this OS is persuasion not innovation.

Every one has a right to say what he or she thinks is right. There is no force or compulsion to use /e/ . I would suggest try all OS out there and then decide what you like. Millions live happily with the stock ROM’s on their Xiaomi and Samsung phone with tons of proprietary apps. We cannot change the world at most we can change our self is what I believe. The answer to the question ‘what is different …’ is answered quite clearly here https://gitlab.e.foundation/e/wiki/en/wikis/faq
At /e/ it is not only the developers but every single user contributes through their efforts by testing and evaluating the ROM and apps - making the OS better and safer.

just because you say so?

Nope, just because you can also self host your data and this is the only OS which can provide this alternative.

Yes right now you have the option of getting a stock Google phone and all the Google bits that cannot be removed. On the other extreme is LineageOS where you must build your own stack of services from various places to make a complete system.

The vision for e is to have a system that has provided stack of services right away that can be used through the e ecosystem. But later you can swap out these and use other hosted or self hosted services. I see e as a way to make the transition to putting together your own stack easier and modular.

Using a translator, sorry for mistakes :

No offense to anyone, but this answer seems to be that of a purist who is a little too utopian or who doesn’t have the same vision as the one of /e/ :
/e/ is intended for the general public, so it needs features that can make it a real competitor to the 2 most used OS.
It needs to run applications that require Google services; and therefore needs microG, which is open-source.
For the DNS criticism I am not aware of, but why say without any argument, that Cloudfare or Quad9 DNS are no better/privacy-friendly than Google’s? What, in his opinion, would be the miracle solution? Because it’s easy to criticize, but adding a solution to the problem would still be a little better;)
Let’s now turn to the ecosystem: today, an OS that wants to be accessible to as many people as possible must have a number of services, including online data backup. First, and contrary to what he claims, we are under no obligation to use a /e/ account and back up our data using it.
Then, for those who want a simple online backup solution, which /e/ does very well, they may as well choose a company or association that respects privacy rather than another whose business is the resale of personal data.
He criticizes the fact that there is only one non-open-source application, which may soon change, whereas it is still infinitely better than all the Android provided by manufacturers, including dozens and dozens of proprietary applications, whether from Google, the manufacturer or companies that have paid for their applications to be installed.
When it comes to ecosystem security, it’s a matter of trust; those who don’t want to use it can easily self-host their data, online, on a card or on a key. But for most people who do not want to perform these manipulations, it is much easier to go through the /e/ ecosystem, which is based on recognized and open-source technologies (nextcloud etc…)
After that it is almost impossible, as with all online services, to prove the security of servers or others, except by finding security holes.
As far as application stores are concerned, the sentence quoted is typically that of a purist who does not see reality as it is: F-Droid is an excellent open-source application store, certainly, but it contains very few applications used by the general public; such as games or social networks. And the general public is not only looking to use open-source applications, they want applications, and at best they look at whether they are open-source, but still download other applications that will be useful to them, whether they are proprietary or not. It would therefore be very stupid for an OS intended for all to offer only open-source applications, which do not meet the needs of the general public and which are generally not enough in number
For Telegram they are not wrong, it must be acknowledged, but nothing prevents the user from changing SMS application in two clicks. For Searx, on the other hand, this is already a big step forward over all the other OSes that use Google by default; and Searx is necessarily better in terms of privacy than Google. But again, as with all search engines, it is impossible to know how data is stored, it is a matter of trust. But the user can very easily change search engines, several search engines are available via the browser, such as Qwant, the excellent French search engine and privacy-friendly (too bad it is not the default search engine by the way - especially since unlike other so-called privacy-friendly “search engines” it is not a meta-search engine, so it does not depend in any way on the main search engines)
Well, here are some arguments to answer this criticism of /e/

Big thank you for your very interesting post.
I totally relate to your arguments.

I agree with you 100%.
I’ve just recently discover /e/ and I liked the philosophic aspects of the project.
I also was aware of LineageOS and PureOS; all of them has its strong and weak points.
What made /e/ more interesting to me is the fact that I will be able to host my data. Huge difference for me.
I will install the V1, definetely.

But I think it is important to the future reader like me who are discovering /e/ project that the “about page” of /e/ definitely should give some credit to the actual LineageOS developers. No one of your staff did enhance the andu’s sentence about that.

And I did seek any information about if /e/ was acknowledging to LOS, and I didn’t find anything, only an explanation in the /e/ documentation… I had to navigate several minutes to find the information…
For me, those kind of behaviour can be crippling and discourages me to go further with /e/.

But I think it is important to the future reader like me who are discovering /e/ project that the “about page” of /e/ definitely should give some credit to the actual LineageOS developers.

I do find that the e.foundation acknowledges everything that is done by LineageOS contributors though, on the FAQ, with incentives to contribute on the project list, and elsewhere…

The About /e/ page you mention is meant to explain what /e/ is to the general public without much understanding of the technology behind it.