Hi all,
Since more than 2 weeks, I am no more in position to reach https://community.e.foundation/ from both an iPhone and a Samsung devices.
Both are running latest OS and use Orange French network.
I have rebooted both of them, but the issue is still there.

I haven’t seen other people complaining about this.
This is so strange…

Any idea ? The https://e.foundation/ web site is still reachable from both devices.

Thanks for your help.

Just tested now, I can reach https://community.e.foundation using both Orange and Sosh.

Thanks for your investigations !

Now, the root cause is found, this is certainly not a coincidence, what can I do on both iOS 14.6 and Android 11 ?
I haven’t found a way to activate/deactivate a parameter related to encrypted communication on both of them.
And why am I the only one to be concerned ?

On both devices, your browser may be able to display the certificate it gets, and if it would consider it as valid.
Usually, you do this by a clic on the symbol next left to the site address, but it may vary for the Apple …

If you can confirm that you have a certificate problem, please try the following :

Well, the browser is not able to display the https://community.e.foundation web site cerificate as it is not reachable (time out).
I am able to reproduce this on Android using Chrome, Firefox and Samsung Internet applications.

Of course, I have cleared the different browser’s caches.

But I don’t know how to update the root certificate either on Android or on iOS.

Strangely, SSL Report: community.e.foundation returns an error : Unable to connect to the server 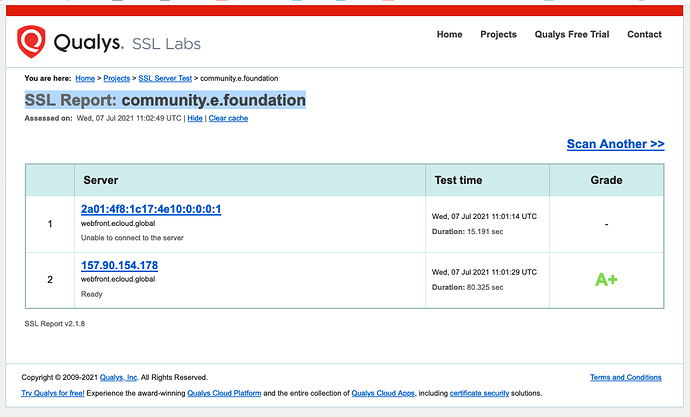 Strangely, SSL Report: community.e.foundation returns an error : Unable to connect to the server

Via IPv6, yes, but via IPv4 it looks ok on your screenshot.
You might want to have a look at your APN settings …

APN protocol is IPv4/IPv6. Decided to change to good ole reliable IPv4. Lo and behold, that was it.

I am able to reproduce this on Android using Chrome, Firefox and Samsung Internet applications.

So, certificate will not be your culprit …Sorry I misled you

Yeah, I would say, depending on device, do some testing. If the APN has IPv4/IPv6, try just IPv6 only and see what happens. If not working then try only IPv4.
On my only modern device with Android 11 and 5G, the forums are accessible using the default APN with IPv6 (which is not editable). Never checked before. Out of habit due to other devices/ROMs not working reliably with IPv6 I immediately setup the modern device to use IPv4.

Given that the other ROMs now use some sort of VPN (which mostly don’t support IPv6 anyway) it’s a bit more involved re-testing IPv6 connections so I just stick with what I know works.

Hi, this is probably not linked only to mobile phones.

SSL Server Test from Qualys reports no issue with e foundation server on both IPv4 and IPv6.
Whereas an issue is still reported on e foundation community server on IPv6. 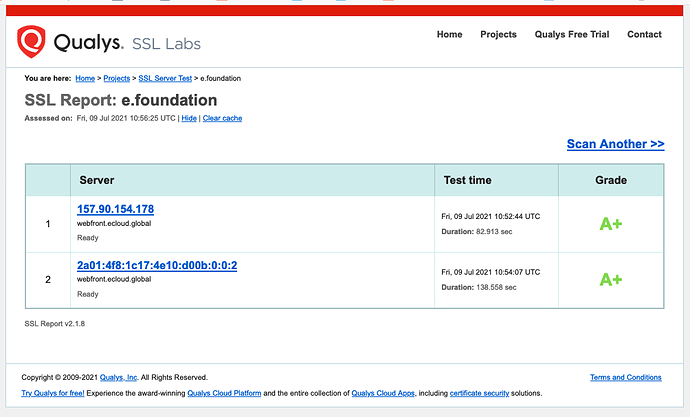 As e foundation community is the only web site with which I am encountering any issue, I will not modify any APN setting just to overcome an issue coming from a web server

They are many web places that aren’t IPv6-enabled.
Community forums are one of them, it’ is not glorious