I heard that the Pie upgrade was ready. Now only waiting to be set up for OTA. @Manoj @unknown @fodinabor @rhunault

There was also some work done on an Oreo upgrade but let’s skip it, I suppose.

I would set the priority as urgent, considering this issue with the current Android version (Nougat). It’s a Fairphone issue, but Lineage applied the fix early this year, so there’s no reason for /e/ to keep us waiting, either by fixing it or upgrading the Android version (as it is fixed in the next versions, I’ve heard). Any option is fine for me.

The Pie upgrade will come to our phone this week, if we believe the rumors. What a story!

The Pie upgrade is there but Magic Earth app is missing on my phone. Are other people missing it as well?
It had already been raised during the upgrade testing phase especially by @pjmbraet, and @rhunault had mentioned a solution…

Use the /e/ Apps Store and Magic Earth is installed again in no time.

Yes, had to reinstall it from Apps, two times, after every official update from Pie to Pie Maps is gone. My last post in upgrade testers group was about this issue yesterday, but this morning I found out I can’t access this group anymore. The testing is over on FP2. Strangely enough, while testing on FP2 this issue never occurred. Now the official build for FP2 is out: two updates since, and every time Maps is gone @rhunault
This happened a while ago on Nougat too, also on other devices, but now the developers have to find a solution for this, doesn’t make sense to post it on Gitlab anymore, it is the same as a few moths ago on Nougat, but now in Pie.

The first official build here (…0216) gave no trouble at all, but the two updates after that removed “Maps”

I delete my previous message. Thanks /e/ Team. You just put a new build via the updater (OTA) and this build has got Magic Earth. You were fast. The way to go!

that issue is resolved 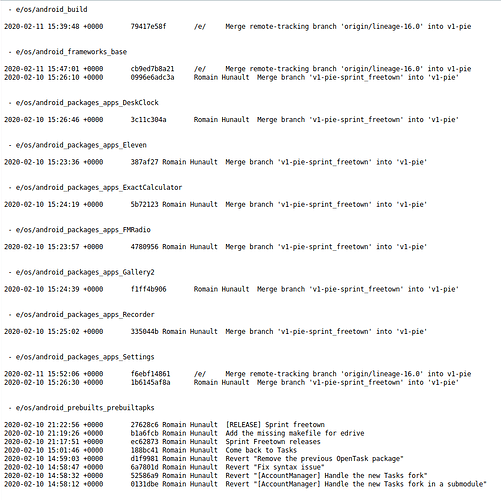 When testing the upgrade from Nougat to Pie there was another testing group about “Sprint Freetown”, but I didn’t understand anything these developers were talking about.

Let me explain our testing process in detail…

I switched yesterday successfully to official /e/ pie! Thank your @fodinabor for your unofficial version that I now left!