just to tell how happy I am after migrating from the awful Android/Samsung os into /e/.

My tab has its bootloader (definitely) unlocked. I don’t know if it is similar after having unlocked via VBMeta. At start-up, I systematically have a warning screen which appears (nearly) immediatly after reboot. 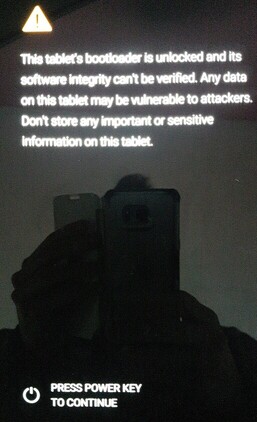 The consequence: it is nearly impossible to reboot in recovery/download modes using the buttons. Indeed, This screen seems to prevent all actions from the buttons (because it waits for “power key” to be pressed?). And here the recovery rebooting after recovery downloading a mandatory step ! Otherwise, the /e/ recovery is ignored, and the native android recovery remains. At this point adb cannot be used, and Odin does not set any reboot option (as i know?)

So I was stuck. after 5 times of unsuccessful attemps to use the power+volume up buttons, the 6th attempt worked. A miracle! Then I saw the saving screen: 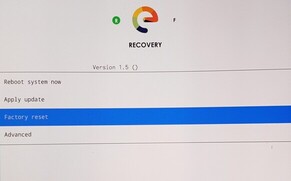 Hi @choucroot
I really hope that you will work out as soon as possible.
I am asking a question here (off topic, let me say): when you write

It’s not so complicated

do you think that is suitable for anybody (including a newbie)?
To better explain my question: at the time I installed /e/OS to my phone, a couple of years ago (or more?

), I found it a little bit complicated / tricky, since I consider myself a newbie (I saw that working with adb and so on is not my cup of tea), and I would like to understand if that became better lately (last time I checked the procedure for the Tab S5e, it did not look like so simple, to me).

Thank you in advance

The problem is that everything goes too fast; environnements, tools, android versions; all change to fast. It took me 3 hours, although I was used to flash my Samsung phones (S7 edge), and Galaxy S2 tabs. But here it is said to use a new tool (Odin on Windows!), while I’ve discovered a video showing a guy successfully using the “old” heimdall tool on Linux. The recovery is not TWRP, but an /e/ recovery. After, I learned that normally the “S” images (Android 12) musn’t be used on Android 11, which is the uptodate system for S5e). Yet the doc mentions somewhere to use to S, but in another part (i hadn’t seen) it indicates not to. Finally it’s ended well for me, but i wonder if it was by chance!

Yes, it is a real nightmare.

I could have written “dont’t try it if you’re not a geek”, or “run away, it is just a mess”, but I prefered to write “not so complicated”. Because I know the hardiest part is to make such migration possible. So 3 hours on that stuff is nothing compared to hours spent by the /e/ teams to make it possible. just try Samsung over Android over Google! It is a plea. So I was motivated enough to go through difficulties and have /e/.

The “dream” would be to send your tab or phone in a place where specialists do the job. And send you back you migrated device.

thank you very much @choucroot for taking the time to answer, and to provide all the details.
I could not agree more …