Thanks for this. I was wondering if I could buy a G7 Play and install /e/ on it. Seems like you think it will work. My plan is no Google, but I wonder why you say " If you downloaded the /e/ ROM, then don’t install Google Apps.?" I’m new to this and want to make sure my phone has nothing Google. Is there something Google installed by default with /e/ ROM?
Thanks!

Happy to help. Currently, LineageOS doesn’t support Moto G7 Play, only the G7 or the G7 Plus. /e/ uses Linage as a foundation to build most of their official devices. Therefore, it will be a while until /e/ will be available (if ever) for the Moto G7 Play.

Linage OS comes without any Google core services or apps installed. So if you wanted no Google, that is about as close as you can get. When /e/ creates their OS for any phone, they usually take Lineage and replace/ add/ or modify apps and files. One thing that is always done is they add something called MicroG. It is a modified Google core system. MicroG has stripped Google from most all telemetry actions (calling home and reporting on your actions, whereabouts, apps, etc). This way you can install the Google apps you want without having to worry about what Google is collecting.

So you see, /e/ has a form of Google installed, it is up to you to decide if you want to use it or not. You can disable it within the Settings so there are no Google actions. If you do this, keep in mind that most apps have dependencies on Google services, framework, play store, tracking, etc). I am going to take a guess more than 90% of the apps in Google Play Store are dependent on Google running in the background. Without MicroG (or Open GApps, or BitGApps, or the others) most commonly used apps will fail to work or work with random crashes. You will have to take apps from F-droid or other places that confirm they are independent of Google. For people new to Android, this is rather frustrating. If you are prepared for this, you will do just fine with /e/.

I hope that answers your questions. Feel free to ask.

I thought I responded yesterday, but I guess I didn’t. Thank you for the response.

I’ve got a Moto G7 (XT1962-5) with broken front glass from a friend. He has been very kind by teaching me Linux in the past ten years or so.

Before entering the nightmare of glass substitution, I would greatly appreciate to know if that model is suitable to be flashed with eOS.

Yes, there is an unofficial version of /e/. So there are no Over The Air updates and my be infrequently updated - or not at all. I am using it on the Moto G7 (River XT1962-1). It is a good phone and the /e/ ROM is pretty stable. Please try it and tell me what you think of this ROM.

Thanks @pmoody for the prompt answer.

As you may be aware we have been working on coming up with a plan on finalizing the list of officially supported devices. This list of devices includes : New devices to be add to the list of Supported devices Existing and new devices to be upgraded to Q Devices to be dropped from the official supported list We will be updating the device lists in case any device has been missed out in each category Sharing the details of the devices here New devices being added. Please note the Devicety…

Please correct me if I’m wrong: in a near future will G7 be OTA updated ?

That is the same conclusion I came to. Let’s hope. Manoj was the author. Do you want to contact him directly?

No thanks. It’s only that I’m still looking around in the forum. Thanks again. I’ve ordered the glass + LCD.
I’ll keep you informed on the progress. Also, I will report the procedure on Linux, since I do not have any Win computer

Well, I’ve repaired the G7 with a new screen right now, so, being eager to flash it with eOS, I started following the precise HowTo from @pmoody.
I’m using linux only, so I get stuck at step 1

I went to https://support.motorola.com/us/en/solution/MS88481 where apparently only Win and Mac drivers are listed.

I’m afraid I will have to find a win computer …
@pmoody ? Are those drivers indeed necessary to unlock the bootloader ?

That is a good question. I went to the Motorola site and I see Mac drivers are easy to find (Mac drivers are a derivative of UNIX) so I expected to find drivers for Linux, SUSE, Red Hat, or other, but I don’t see any on the website. I am not saying it isn’t there but I don’t see any direct links. Often download files are found in different parts of the website so it could be there somewhere.

I am completely unaware of the Linux driver installation and have no idea if the system has USB drivers embedded in it’s code. Try connecting the computer to the phone and see if there is any recognition. It could be possible that you only need to install ADB.

I know someone has connected Linux to another Motorola phone so I suspect the answer is out there somewhere. I wish you the best of luck.

Thanks for the reply, @pmoody. I had a look at the net and it seems that drivers are not necessary.

I will write here the how to for Linux, but in the meanwhile I would be reassured that the splash screen I see before the eOS booting stage, is expected 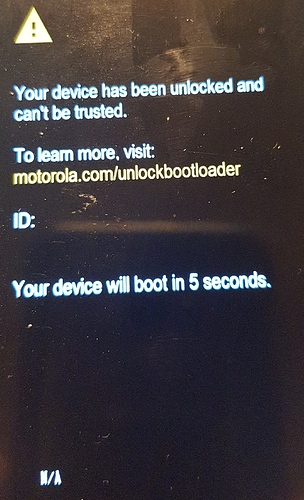 Yes, this is completely expected with the bootloader unlocked. A minor inconvenience.

i changed this screen with MotoBootLogoMaker … works well for me … only tricky thing was to find a proper logo.bin … i found it in official firmware file …
and … a white text appears during boot on screen (not in boot logo, “N/A”)… with a white background you do not see it

Thanks for the hack. It may bother some people enough to do what you suggested.

The differences in installing the G7 in Linux are really tiny

In Linux terminal (Mint 19.3 Cinnamon, but I think it’s irrelevant)

no step 1 needed
from step 2 to 9 as above
step 10 no need to install drivers
from 11 to 34 as above
I stopped here, since I did not install Magisk

Could be a good idea to check, from time to time to enter in the terminal
fastboot devices
to check that the phone is connected and the USB cable is the proper one

I can’t thank you enough for this guide. While I seem to be tech-savvy, I am certainly not experienced when it comes to flashing Android ROMs. This guide really made it a simple process.

dear pmoody, thank you very much for this instruction! Encouraged by your post, I dared to buy the latest version of Moto G Play: number 9.
Now I found out, that there isn’t yet a fitting twrp compiled. It’s too much effort for me at the time to learn doing this! And It’s even difficult, to find the right places in the xda-forum to lie in wait for the right version. Also a special release of /e/ seams to be needed. If you know anything what to do about this issue, now or later, I would be very thankful for any hint or link!
best wishes! dudu
also lots of thanks to nottolino for linux-modifycations!!!

Yes, buying a phone can be an exciting process. Unfortunately, if you are interested in customizing your ROM, you need TWRP (or other recovery) and you need to check to see if that model has been rooted and what custom ROMs are available. As you found out, TWRP isn’t available yet. But in the meantime, you may be in luck with Magisk if you want to get root capability. It is a little convoluted but I think it is probable. If you need help, just message me and I will see if we can at least get you root. Best of luck.

fine! thank you! at least I learn a lot, scrutinizing the single steps
like this…

seems Magisk is no alternative as a recovery, you still need twrp or cwm as recovery before being able to install Magisk. So what is it good for in this case?