I just bought a used Sony Xperia XA2 that has been updated to Android 9. From what I read here the OS should be at Android 8 for the official builds here. I have no idea if it’s recommended to downgrade the phone to Android 8 since it is already at 9, but I did find a page here for test versions:

So who here has installed this test version and what does NOT work with it?

Last year I unlocked the bootloader on another Sony phone-an Xperia XZ. There weren’t any ROMs for /e/ but I was able to get Lineage on it. I started having camera and bluetooth problems that I’m wondering if those are problems that also would effect this Sony Xperia XA2 phone. The camera problems I had were two fold: the front camera stopped working and my rear camera lost capability to record video. The bluetooth audio would only pair with certain bluetooth speakers.

It would also randomly reboot till I put Lineage on it so I think that problem had to do with unlocking the bootloader.

So have any of these problems shown up in these ROMs on /e/ with the Xperia XA2?

Hi Marty, I’ve been running pie test build most of the time since last August, currently on 0.10-p- of 14 Aug. I was just posting to another user about what works with it; see here.

What I forgot to mention in the other post is that the test build has not had any updates since August. There will be an official Q version out anytime now anyway.

I’ve not had the camera or random reboot problems you describe. Bluetooth I don’t use but just tested it sending files to another phone and it worked OK. Bluetooth is notoriously random with what pairings work or don’t anyway.

I do not know the status with recent ROMs, but I am running /e/OS 0.7 since 2019 on Sony XA2 H4113, and I have not experienced any issues with bluetooth, as far as I can remember.
I cannot comment on the camera (I guess I have taken no more than 10 photos since I have the device …).

After being able to install /e/OS properly (more on other posts in the forum), I have not had any issues preventing me from using it as my daily.

Thanks for your detailed review! I’ve flashed plenty of ROMs in the past and don’t anticipate many issues. I should get my XA2 next week and then I’ll flash. I already have done a lot of reading on this specific phone and downloaded the needed /e/ files.

Do u know if the /e/ software enables VoLTE on this phone? I think the kernel that Lineage bases this on gets VoLTE working as it does work on my Xperia XZ because it has Lineage on it. My cell phone provider uses this now to provide voice calls and started this in January of this year.

Do u know if the /e/ software enables VoLTE on this phone?

Not sure, but I’ve never seen a setting for it with pie and I tried an unofficial Q build a while back; don’t remember seeing it with that either.

Lots of discussion on this topic recently, for example here and here.

Edit: I was confusing VoLTE with VoWiFi, did some research, and I’m still confused!

How would you know if VoLTE was active on the phone? In the mobile settings mine is set to LTE preferred.In the status bar just the signal strength indicator is present.

My cell phone provider is Ting. They started sending me emails last May that by January 2021 they would only provide 5G and if your phone doesn’t have 5G then u would need a phone the provided VoLTE (Voice over LTE). They also said that my current Sony Xperia XZ does not provide VoLTE. I searched around and did find a couple people posting that the XZ does have VoLTE but they were not in America like me. I decided it was a software issue if the hardware is in my phone and that perhaps Sony had just not enabled that feature in American software.

I had put many different ROMs on my previous phones and had /e/ working before on a Moto G4. I liked the OS and since then have had Google issues that made me want to de-Google like /e/ offers. Unfortunately /e/ doesn’t have software for the Sony Xperia XZ and I went with a ROM called crDroid 5.12 that is based on LineageOS.

I put that on my phone back in October till now in February and my voice calls are fine. There were a lot more mobile network types to choose from. VoLTE is not in there and I searched what these names mean and it seems like these are all pre 5G networks.

Here are 3 screenshots on the XZ showing which mobile networks are offered: 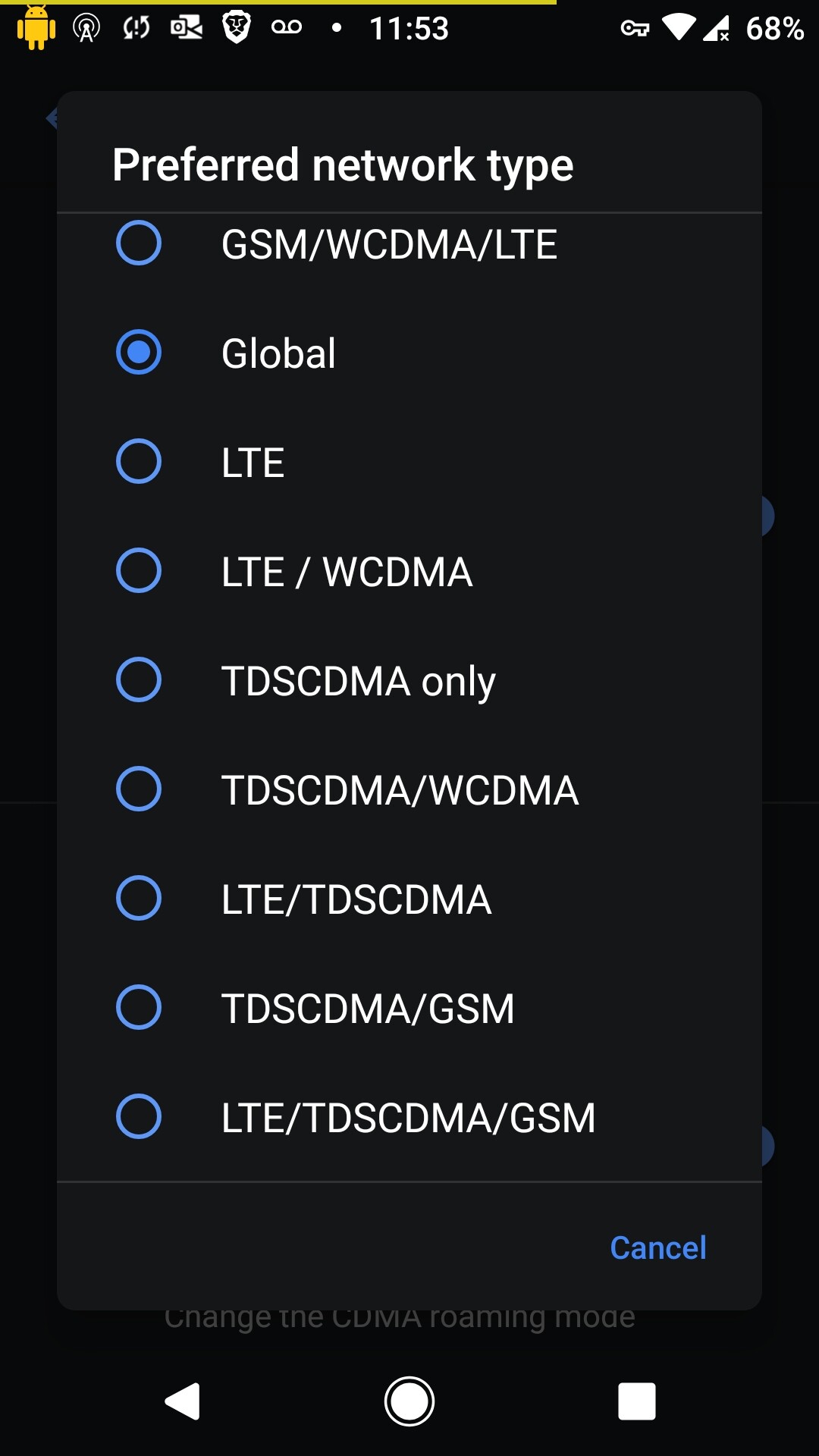 There’s also a test I ran that says VoLTE is now provisioned
There are Sony phone codes that may work on the XA2 as well. Dial this in the phone app:

This is a screenshot that I see on the XZ 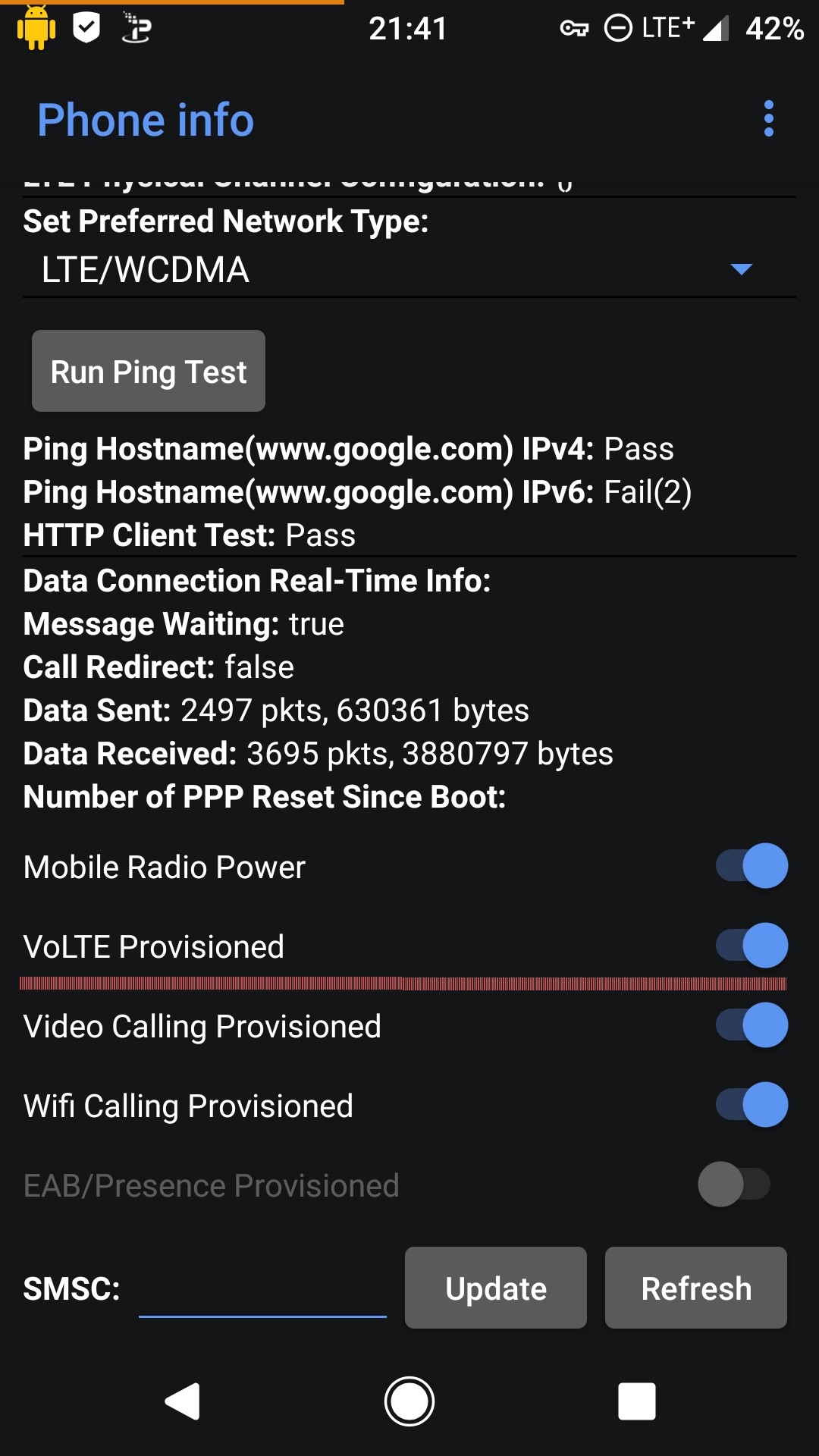 I have had some problems with this ROM on my XZ, though. My front selfie camera doesn’t work. My rear video camera does not work (still shots do work out the back of the phone).

I’m thinking that since the XA2 is 2 years newer than the XZ that it has better hardware and VoLTE can be similarly activated with LineageOS and it seems like I’ll have my video camera to use again!

Result of that dial-in phone info. 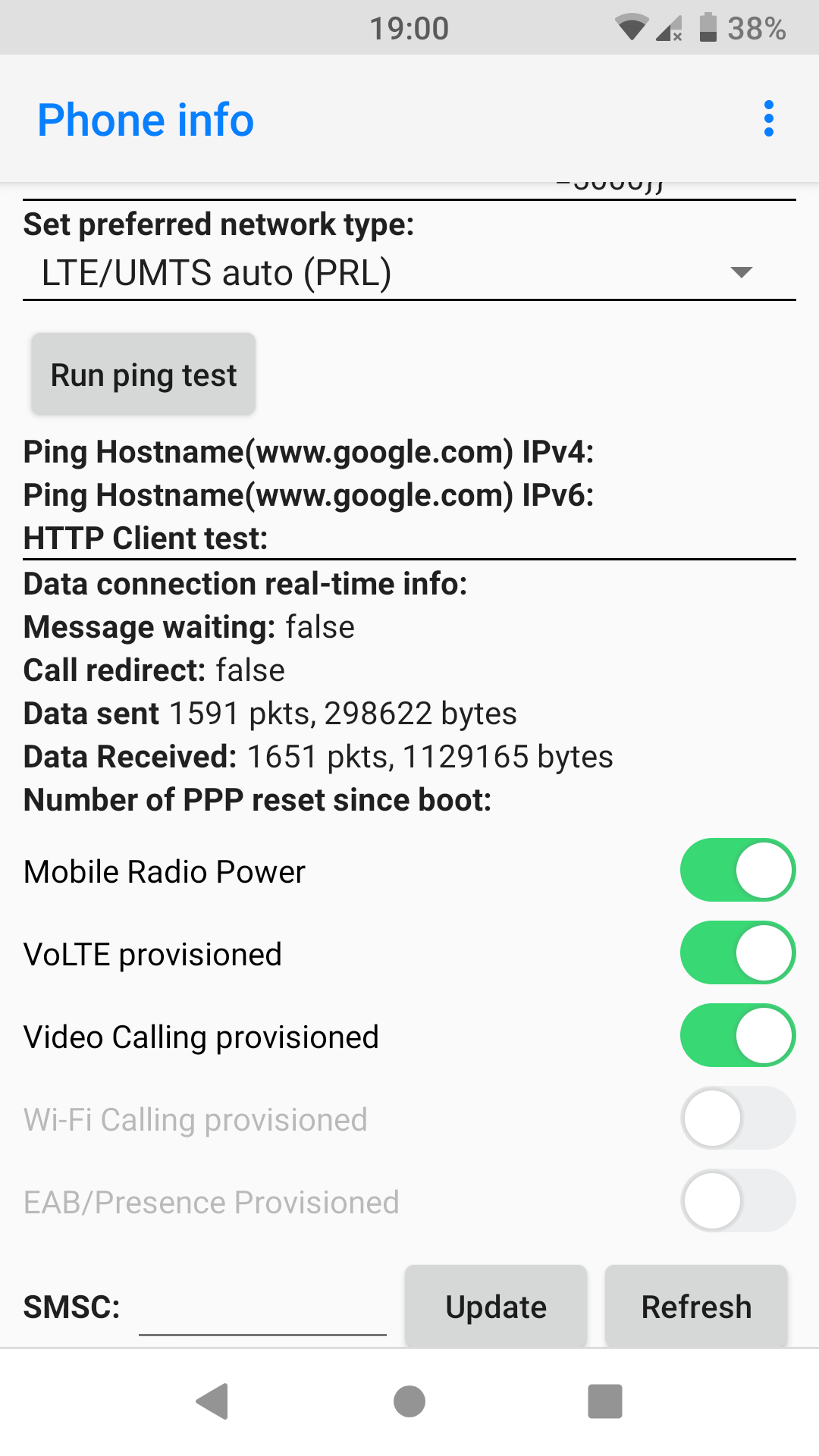 Thanks for that. I was wondering if the XA2 is already VoLTE ready and it looks like it is with /e/ installed!