This might be of interest to some e-users. Initially, JMP will offer an inexpensive Data SIM or eSIM for USA and Canada, but also might expand to Europe, if there’s enough interest.

JMP’s present service consists of SMS, MMS, and voice calls via XMPP app, and a dedicated phone number. It’s quite cheap, too. 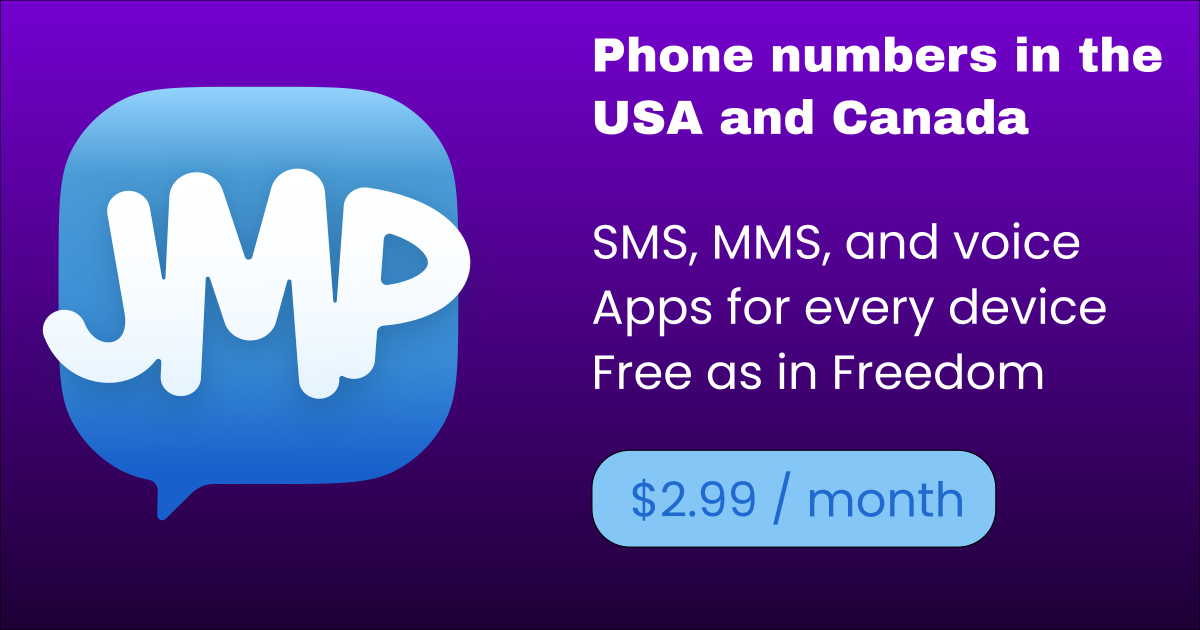 Your phone number on every device

I’m following JMP for some time - I think it’s an exit route out of carriers shenanigans with some advanced features by courtesy of xmpp.

If you plan to use it as sole provider, read EmergencyCalls - Soprani.ca Wiki (last edit seems recent - and I guess it applies to the eSIM too)

I’ve been an XMPP customer of theirs for a few months now, and I’ve found that it works great. I mainly use it as a second line on all my devices. My regular (MVNO) carrier is quite inexpensive, too, and is supportive of their customers’ privacy and security, so no complaints there.

I’m really looking forward to an eventual data SIM, and I hope they do add Europe, so I can cheaply roam on data networks when I travel there, and not have to seek out a local SIM.

That sounds cool.
I eventually did get a JMP number for my one device without SIM. Phone calls and messaging worked really well. Thanks @Taurus for bringing it to our attention awhile back. Audio on the phone call tests sounded better than when usimg SIP/Linphone.
Will definitely take a look at their SIM offering as I’ve been meaning to move a couple of devices away from T-Mobile.

EDIT: Oh yeah, eSIM only so currently not an option for my devices.
Pricing is okay I guess if one doesn’t plan to do a lot via the SIM (i.e. mostly WiFi).
Compared to the service I mentioned in another thread, PGPP (Pretty Good Phone Privacy), they charge $90 per month for unlimited high speed data. For JMP the same amount is about 12+ GB.
Which one is priced better I guess depends on how one uses their device and whether or not they make use of WiFi when available.

Yeah, I don’t use much data at all (less than 150mb per month), so the kind of pricing JMP is planning for its data SIM would be very economical for someone like me.

I don’t use my phone as my primary internet device, obviously.

I eventually did get a JMP number for my one device without SIM.

You know you can add that same JMP account to all your phones and computers, right?

I wondered and did some napkin math for how long you can babble on 1GB - I applied a 50% protocol overhead and was thinking of the widely used voip codec SILK that can do different bitrates.

(minus some baseline xmpp keepalives too, think very few MB/month)

You know you can add that same JMP account to all your phones and computers, right?

Yes, which I realized accidently. I setup the number on my primary before installing an xmpp client on the secondary. Then when I did a test call from another device both phones were ringing. Nice.

At times I’ve been seriously considering getting a good mobile hotspot so I can remove phone lines (drastically reducing my bills from both T-Mobile and Mint Mobile) while still being able to use the SIM-less devices outside the home on occassion.
Keeping a SIM in my daily driver and one other much faster multimedia device.

I had no internet for years which is why all phones had a SIM (flash-a-holic ROM testing days). Time to rethink and restructure.

My old brain hasn’t been thinking straight. Unless I plan to serve multiple devices away from home (highly doubtful) I wouldn’t need a dedicated mobile hotspot.
I forgot that the SIM/line on my OnePlus 8T has 20GB hotspot data.

Briefly, COVID hit in early 2020 and we were out of work. Perfect time to update/upgrade old laptop and get back into Slackware. But no internet. Pulled my old Samsung Galaxy Light (JellyBean era) out of retirement, got a SIM for it and used it as a hotspot. WiFi Tether Router software was used in hopes of hiding the tethering.
Also had a Fire TV Stick. At times the hiding didn’t work and T-Mobile would send a message letting me know the limit is being reached. So I kept increasing the limit.
That and the battery drain on the little guy had me looking at mobile hotspots.
Then read an article mentioning the current offerings used old modems that were no better than on my old Samsung. Basic 4G really. Why not get a 5G phone instead and use that, which I eventually did. Moved the SIM over to the OP8T and re-retired the Galaxy. Worked great for the laptop (using PDANet) and Firestick.
Only a few weeks later TMO notifies me that internet service was now available in my area. Had I known the service was a possibility I would’ve held off on buying an expensive phone (not really a flagship kind of guy).

Okay, not too brief. Fast forward now and just remembering I have the hotspot data so I guess I can start trimming lines.