Murena FP4's on the way

You might want to monitor this: /e/ OS "easy" installer: how to help it support multiple devices! - #29 by Ingo_FP_Angel

Is there an advantage if you buy a murena phone instead of loading the OS yourself?

As a customer you get direct support by the e foundation, and you should get the phone with the OS on the stable release channel, see Different Build Types.

Access to the stable release channel is not guaranteed otherwise. The Easy Installer should install stable, but is not in sight yet for the Fairphone 4, see @Ingo_FP_Angel’s link.

Will I have the hardware warranty / guarantee when bying FP4 Murena?

Please keep in mind that Fairphone can only provide support for devices running on Fairphone OS.

In the legal text more precisely:

[…] if you modify some Android partitions when you flash a Third Party Operating System, which makes it impossible to go back to the official Software version provided by Fairphone.

So I have to install FairphoneOS before sending FP4 Murena to Fairphone in case of hardware issues? Is this possible?

I understood that e foundation provides guaranteed support software-wise when buying the FP4 Murena phone from them. But what about hardware?

Hi @MathiasR , for question regarding the devices you purchase from /e/ Pl send a mail to helpdesk@e.email
The team would be able to help you with the correct answers.
Alternately, you can also check on the eSolutions website

So I have to install FairphoneOS before sending FP4 Murena to Fairphone in case of hardware issues?

Yes.
If you want to send it to Fairphone.

It will be, but it’s not online yet, see https://support.fairphone.com/hc/en-us/articles/4405858189585, section “Revert to Fairphone OS”.
Back when the Fairphone 3 came out Fairphone needed some time to get this online, too.

If you have purchased the phone from us …ie from the eSolutions Shop then you can send it to us. We will send it to the Fairphone folks and get the repair works done. No need for you to flash the stock and send it to us. 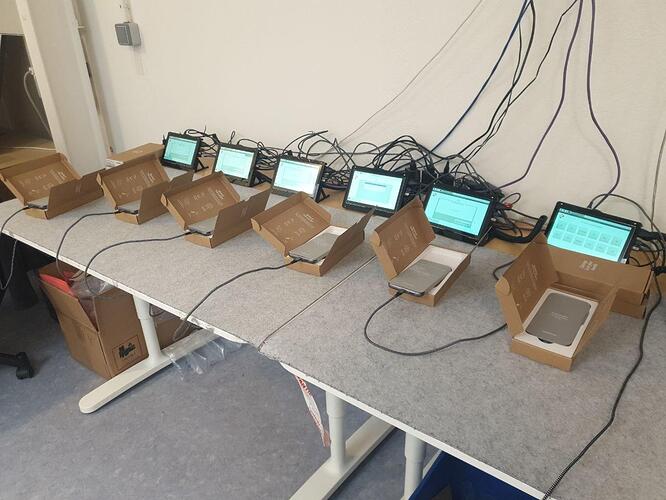 All set for the release of FP4 phones.

The first batch of Murena /e/OS flashed FP4 phones should be dispatched to users starting later today.
Build would be v0.20 and OS version /e/ R
The documentation with manual download links will also be released later today.
We will come out with a detailed announcement later today.

The dev builds have not been released as yet. They will be released once we have completed the testing for v0,21 . Tentative ETA for v0,21 release is end of this month for all users on the Dev branch.

The testing for the FP4 builds was done internally which helped release it before the release of the other builds of v0.21.

why is it then called:

What is an R vs a DEV build?
Is one or the other the easy installer implementation?

Cool, thanks for the insight

BTW in case any of you are wondering …the installation is getting done here using Raspberry Pi powered flashing stations. This is the photo of the office of the group that flashes the devices we sell on the eSolutionShop , I think that is a cool adaptation of the Raspberry Pi.

It sure is an awesome picture.
I see you guys are using some custom /e/ program to flash the devices.

Is this some sort of easy installer on steroïds?

Hey there, I’ve been lurking so far and just wanted a little insight:

I’ve pre-ordered the 6 GB variant of the Fairphone 4 in mid December and a protective case and 3,5mm to USB-C adapter with it, the latter of which was said in an email to be delayed until mid February. The same email also said that you’d assume I’d prefer my phone as soon as possible and that you’d refund the adapter and send the phone right away without it, but asked for confirmation, which I sent (saying I don’t care whether it’s refunded or split into a separate order for later). This happened on Wednesday.

And since then, silence. Understandably, but still, I’d like to know what’s up; is there any way to tell when the thing will be on it’s way, or when I can plausibly expect it to be? Will I get a tracking link? If no, might it be on the way already? I’m sorry for this wall of text, but I’m getting SO impatient with every little delay and just wanted to ask

Well, we are the community. You have to ask the company.

But, as you can read

They will send it in batches…

Hi, Pl send a mail with the purchase details to helpdesk@e.email
The team should be able to guide you further on the purchase and share a tentative delivery date.

It is indeed an advanced version of the installer and coded by the vendor and /e/ developers.

Ah okay, I did that (with the order number at least, hope that’s enough), guess it’s time to wait

Thanks a bunch for the reply!

coded by the vendor and /e/ developers.

seems for me there is a cooperation between /e/ and vendor developers.

question for me:
why was and is it not possible to have the original camera app available for FP4 /e/ OS?
There are two lenses / a widerange lens but possible to use it in OpenCamera.
I understand that with all other manufacturers. But not with Fairphone. Not if there is a cooperation.
And that definitely exists

That would be fantastic to have the original app…

seems for me there is a cooperation between /e/ and vendor developers.

This would be desirable, but I don’t think the quote you use warrants that, earlier:

the installation is getting done here using Raspberry Pi powered flashing stations. This is a screenshot from our vendor’s office…the guys who flash the devices we sell on the eSolutionShop

It doesn’t sound like Fairphone would necessarily be “the guys who flash the devices”.