That’s why I installed Bromite from there and don’t use the outdated stock browser for anything. Gets about two or sometimes three updates per month.

The plain browsers (I mean: Bromite and Librewolf) are (I mean: concerning privacy) not as different as some people think. They are indeed comparable. A significant improvement of the user’s privacy could be achieved only when the mobile version of Librewolf would allow to install its sophisticated addons, especially uBlock and some others (not sure if it does).

I have tried Mull now and cannot fathom why eOS ships with a Bromite variant.

Mull is closer to Murena’s goal, so why did they go for a Chrome-based browser? Makes more sense to support a Firefox-based browser.

Mull is superior in every way.

Bromite or UnGoogled Chromium variants are fine. No better or worse than Firefox variants (Mull, Fennec, Iceraven). As @irrlicht alludes to, the issue is more about updates. As I and others have suggested, the browser and webview should be updatable outside of ROM updates.

Something like a repo with regular / semi-regular updates of the default apps more inline with their upstream counterparts.
One upside I see is keeping some apps up to date without having to move up to another Android version or build. On my Essential PH-1 with /e/OS Nougat I was reluctant to move up to Pie. I eventually did and Pie turned out fine but then I was even more reluctant to move up to Q or R. The more Google takes away my freedoms to do what I want to do the more reluctant I become. I stayed on Pie for a long time; manually updating microG and webview (with Bromite’s) to stay pseudo current.
When I finally decided to move up again, choosing between Q or R, I went with Q (mostly because F-Droid Privileged Extensions doesn’t work with R).

Anyhind, being able to update various default apps without having to update one’s OS, especially if you can’t (no future builds) or won’t (satisfied with Android version) makes sense to me. Otherwise folks will just disable default apps and install their upstream counterparts which seems silly (as in shouldn’t have to).

@marcdw I agree with you.

The lack of updates of the various system applications and other webviews are very often pointed out, which I find normal. Being “privacy by design” does not mean being “secure by design” however the vital minimum of security must be reached.

I use the basic applications quite a lot (especially since they work quite well and I’m satisfied with them) because I also find it stupid to have to install a whole package of third party applications. That being said, as far as browsers are concerned, I use third party apps like Mull, FireFoxFocus, DDG), as internet browsing is probably more risky than using classic apps.

A solution would be to allow to remove the basic apps (but it’s not for now from what I understand).
But the most relevant solution as you say would be to be able to update native apps without having to update the OS.
And I understand perfectly the opinion of people who complain about the lack of security on the forum, especially when few things are necessary to be in the rules.

After that, it’s always easier to say than to do. So let’s be indulgent with the /e/ team who does a great job

I also agree that lack of updates is problem here, for browser and other forked default apps, but since this thread is about browser, I focus on that.

One reason I read these threads is cause apparently there’s some discussion at /e/ team to move entirely away from Bromite.

While I have requested for the update to the latest version, based on the frequent issues we get with Bromite, the team is discussing moving away from it entirely. Still under discussions.

If that’s the case and work for new base has been done behind the scenes, that could explain “no updates to browser even with OS updates” policy lately. But still it’s an issue to not offer update. Time will see how things go forward.

They should move away from that reasonless forking of whatever.

I disagree. Supporting Google through using a Chrome-based browser is not good if the goal is to give Google less control.

I do agree that slow updates is the biggest problem. I see no reason to fork at all. Just include Mull by default.

It seems that the question of update was asked to Manoj. For me it’s the best solution, have an update via App Lounge (or F Droid) directly.

By the way, including Mull by default would be funny and open minded from /e/ team as it’s build by DivestOS

I like the Bromite feature to be able to get search results from various different search engines. It doesn’t seem to be the case with Mull, am I correct?

@MaMaTT88
Mull and Fennec F-Droid and official Firefox has an option to choose a different search engine both for default and per-search.
Right above the URL bar are the icons of all the different providers you have available.

Umm, do you mean search for a term and have the results come back from different sources?
I think that’s usually the case with a lot of engines, especially searx. There’s a lot of info out there on the various search engines and how/where the results come from.
Can you provide an example of what you mean.

Of course in Mull you can add any search engine you want.

But just in case… 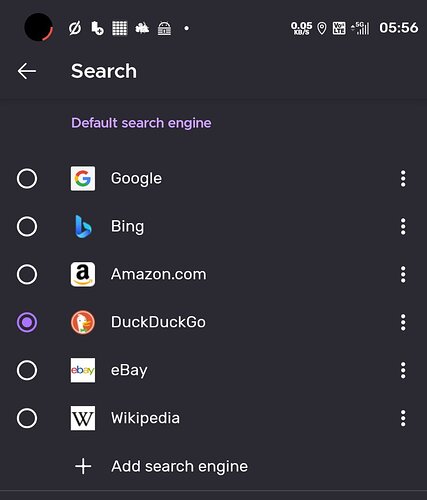 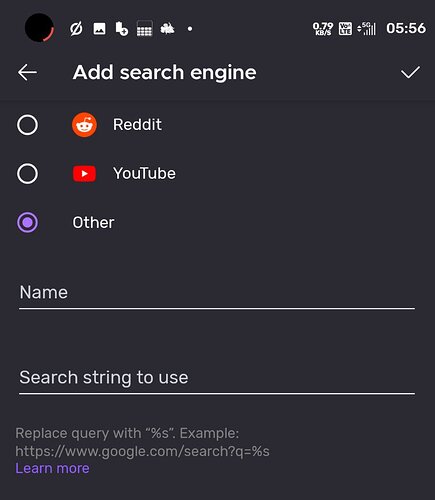 Yes @marcdw, I mean search for a term and get results for as many search engines as you require. For example in Bromite, you can discard video results from YouTube, favor science research results from your favorite website, combine entries from DuckDuckGo and Qwant, etc.

@SkewedZeppelin true, the icons show the different providers but to my knowledge you can only select one and get results from that one. Not from a bunch of different ones.

Hum what I mention is actually a feature from the Spot engine, not the browser…

Are there regular updates for Mull? I see the App Lounge version is from Sep 2021…

Just include Mull by default.

Does Mull include a System Web VIew component as (I believe Bromite does)? If not, then an alternative source would need to be found for that

The last version on F-Droid is from July 31:

F-Droid is an installable catalogue of FOSS (Free and Open Source Software) applications for the Android platform. The client makes it easy to browse, install, and keep track of updates on your device.

Are there regular updates for Mull?

I see the App Lounge version is from Sep 2021

This is horrifying and if true I’d prefer it to be delisted instead of making users vulnerable.

@petefoth
I maintain both Mull (privacy oriented Firefox) and Mulch (security oriented Chromium).
I also help maintain Fennec F-Droid, but I wouldn’t recommend its use over Mull.

Mulch is used as the WebView for DivestOS, but there is a standalone version available for all Android users.

Thanks. That’s useful to know

Ah yes, powered by SearX which is quite configurable.