Two versions of TrackerControl in F-Droid

There are 2 versions of TrackerControl on F-Droid, see pic.

Are there any differences? Which should I use?

You could double check what you are being offered with source.

Monitor and control trackers and ads.

Second one comes from IzzyOnDroid repo
probably built by authors

I am using the one from f-droid itself, because maybe i delete the izzy repo (using it because of 2 apps for testing only) and hence i would loose the TC source, too

It’s always the best to use the f-droid repo for all apps, except you have good reasons

The one from droid can be recognized when you check the versions at the end of the page. fdroid is included in the version name.

The IzzyOnDroid repo is probably the best known and well-respected repo behind the main one. Not to mention a huge selection. Almost 800.

IzzySoft (the person) is very active on the F-Droid forum and is all over GitHub, GitLab, and other places. Helping devs get their apps squared away for inclusion in the F-Droid repo or his. If updates fall behind he queries the devs and assists them in getting their stuff back in order.

If you have 100% trust in what comes from F-Droid, you can have the same with IzzyOnDroid IMNSHO.
Besides, sometimes devs don’t want to deal with F-Droid for various reasons (NewPipe for instance).

By the by, IzzyOnDroid has its own client now. Good if one wants to keep things separate.

By the by, IzzyOnDroid has its own client now. Good if one wants to keep things separate.

Thanks Marc for your always interesting and informative posts! Picked up one of your tips a long while back for IOD repo to get omega launcher; been using both ever since.

Just having a look at the client now.

Strange on my other phone F-Droid only shows one version.

Are there different F-Droids? I often find apps on F-Droid on one phone but not on the other. 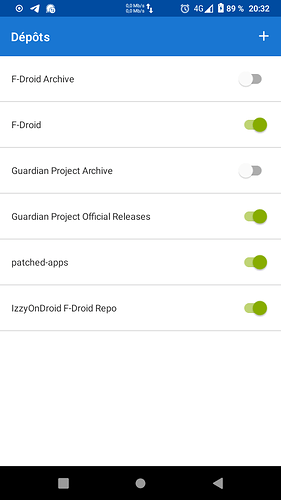 Thanks, so where you download F-Droid affects which pre-loaded and selected options you get.

Thanks, so where you download F-Droid affects which pre-loaded and selected options you get.

Is that a question?
What do you want to know?

A software repository, or “repo” for short, is a storage location for software packages. Often a table of contents is also stored, along with metadata. A software repository is typically managed by source control or repository managers. Package Managers allow for installing and updating the repositories (sometimes called “packages”) versus having to do this manually. Many software publishers and other organizations maintain servers on the Internet for this purpose, either free of charge or for a...

YOU must have haded the fifth repo, because there are four by default .

No, I didn’t add a repo. I didn’t realise F-Droid sourced apps from multiple sources.

Is that a question?
What do you want to know?

No question, a statement.

He meant the IzzyOnDroid repo you have must’ve been added by you since it is not included with the app. F-Droid by default only includes F-Droid and Guardian Project repos.

I didn’t know it was a modular app store. I DIDNT add anything.