Any idea why this new release ?
Note: I installed it without noticing any bug
https://images.ecloud.global/dev/a5xelte/

One addition in the stable builds was the App Lounge. Will check with the team and get back as to what fixes came in as part of the 0.23.x release.

Will version e OS 1.0 have a better camera app? My wife and I have the OnePlus 7T and the camera app is very buggy and the picture quality is not good.
Also hoping the fingerprint reader is much better as currently it takes several failed attempts to login on our phones and often we run out of attempts and have to use our phone’s PIN to unlock.

You can use GCam if you like. The link below will bring you to an XDA forum explaining a bit about it and install instructions. This is a hub for all the various Google Camera ports for devices from Google, Samsung, Xiaomi, Motorola, ASUS, Nokia, and many more.

It has no trackers and no connection to Google. At least not one that Tracker Control could find.

Or maybe a better option instead of google cam. On this topic you will find lot of information and discussion.

I have successfully made nougat builds for suzuran and other Sony nougat devices, using the v1-nougat tag. However, these builds are given a number e-0.21-n-...

Please can the team make available a tag allowing us to make builds the latest nougat source and have the builds named e-1.0-n-....?

Note that I am not going to become a ROM maintainer, but I would like to be able to make unofficial v-1.0 nougat builds for these devices as I have been doing for quite a long time

Hi Pete, I have requested the team to create a tag for these builds

Update: The team informed me that the process of adding a tag means back porting all the existing applications to Oreo and Nougat. This has not been done as of now nor is it planned as it will mean a lot of extra work for the team.
As such, they would not be able to add a tag for v1 to Oreo and Nougat source.

Thanks for asking Manoj.

The team informed me that the process of adding a tag means back porting all the existing applications to Oreo and Nougat. This has not been done as of now nor is it planned as it will mean a lot of extra work for the team.
As such, they would not be able to add a tag for v1 to Oreo and Nougat source.

That’s unfortunate! So, in the absence of community volunteers to do that work, /e/OS for Oreo and Nougat devices is now ‘abandonware’

I will have a think about the way forward for users of these devices - and start a separate thread - but my first reaction is that it will involve custom builds of LineageOSforMicrog, including up-to-date versions of the upstreams of /e/'s forked apps (K-9 Mail, Etar, QKSMS, NextCloud sync client and Notes, OpenTasks, DAVx5 and ICSx5).

Such builds won’t have /e/Os’s consistent colour scheme, Apps / App Lounge, and any 'degoogling` that /e/ has done in LIneageOS and the upstream apps. But they will allow users to continue to - relatively easily - access /e/'s ecosystem, and it has the benefit of receiving more timely updates of the upstream apps that happens at the moment, and any updates to LineageOS, MicroG, F-Droid and Aurora store.

Anyway. time to go away, think, and experiment with L4M builds

An important factor to consider is the availability of security or vendor patches. That plus the fact that applications are usually tuned to work on the latest OS versions are all issues you will have to consider for Nougat and Oreo.
These unavoidable problems are what push us towards purchasing newer devices and move towards newer OS versions.

An important factor to consider is the availability of security or vendor patches.

None of these devices receive updates from the manufacturers / vendors. And neither do many (most?) of the devices that /e/ continues to support (officially or unofficially) with later Android versions.

I will look into whether Lineage OS continues to provide security updates in the Nougat and Oreo branches.

My main interest in /e/OS has always been to extend the useful lifetime of mobile devices, and allow phone users to step off the unsustainable merry-go-round of throwing away perfectly useable devices every couple of year and buying the latest shiny toy.

I thought that was one of /e/'s main objectives too, but I can no longer find any mention of that on the /e/ Foundation website

Anyway, continuing to make unofficial / custom builds for these devices may not be the ideal, and may mean that they run without the latest security patches (most of which, from what I can tell, involve fixing security issues which will not be problems ofr most users). But that is still better (in my opinion) than throwing away a device that can still function very well.

Here is an example makes me optimistic. 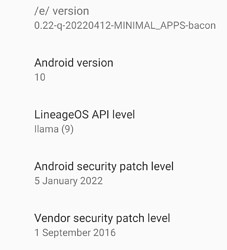 Greetings! One doubt, with the new App Store, we Aurora is still needed? seems that they fused both Stores in one.

Hi, I have a question concerning the decision to upgrade an FP3+ to R version (now in beta). Is it better to wait for e 1.0? Is it better to flash the old sys with android 11, then flash e 1.0? The upgrade to android 11 will happen automatically with e 1.0?

I thought that was one of /e/'s main objectives too, but I can no longer find any mention of that on the /e/ Foundation website

The code for Oreo and Nougat devices will still be available in our gitlab. Users with ROM building skills can make the builds. Some newer applications like App Lounge and the soon-to-be released Privacy Central will be missing. ROM builders can volunteer and modify these applications to work with Oreo and Nougat.

Is there a thread to follow the testing of the Galaxy S7? I would like to know what issues or bugs to expect before I update to v1.0.

The code for Oreo and Nougat devices will still be available in our gitlab. Users with ROM building skills can make the builds.

Yes the Oreo and Nougat branches will still be there, but - unless I have misunderstood what Romain stated in his Telegram post - those branches will not be updated, and will therefore not receive any bug fixes, or new or changed features, either in /e/'s own software or from upstream changes in the apps that /e/ has forked.

Nor will they get the changes made in the upstream LineageOS components that /e/ have forked. And when I look further into this, I see that the Nougat and Oreo branches of these /e/ forks have not merged recent upstream changes for quite a long time. For example the v1-oreo branch of /e/'s android_frameworks_opt_telephony repo was last updated 9 months ago, in August 2021, while the lineage-15.1 branch of the upstream LineageOS repo was updated in February of this year. For Nougat it is even worse: the last merge of the upstream LOS cm-14.1 branch into /e/'s v1-nougat branch was done in October 2020, while the LOS branch was also updated in February of this year.

So there is little point in ROM builders making builds from these branches in future, since they won’t have any new code, and the code that is currently there is already lagging very significantly behind upstream.

So it is pretty clear (to me at least

) that the only way users of these devices will get up to date software - in both apps and the OS - is for ROM builders to make customised builds of Lineage4MicroG, including the upstream apps from which /e/ has forked their apps. Yes, they will miss out on whatever work /e/ has done on their forks to de-Google the code, but they are already missing out on new /e/ features. And from the Gael’s article on the state of degooglisation the main degoogling / privacy gains come from replacing Google’s own apps with privacy-respecting alternatives. So a Lineage4MicroG ROM with these apps included, will still be pretty good in terms of respecting privacy, while benefitting from bug fixes and new features both in the apps and in the OS.

I am currently making a final set of /e/ nougat builds for the devices I have built for in the past (although I’m not sure they will be very different from the last set I made, given what I have written above). Once those are done and published, I will focus my building efforts on building the customised / extended Lineage4MicroG ROMs outlined above.

concerning the “New devices“-topic, could you please draw the team’s attention to the proposal made in Gitlab issue e/backlog#5320.
I’m rather sure that raising the a3/5/7xelte devices to R (on top of Q) will be a job without any costs – disregarding the necessary time slots on the build servers and the storage to hold the images.

Hi @RdLr perhaps you would volunteer as a ROM Maintainer? … I am stuck on this subject as I cannot make Android 11 build on 8GB RAM. Happy to test your a3xelte build, if you like?

no, no – that’s too BIG a job for me …
and beside that: I suppose that R will be the last version for good old a3xelte & Co. But R still fits, and if you really like to mess around with it, you’ll find an unofficial v1.0-rc.4-r for a3xelte at https://ecloud.global/s/MBR85BB4pLewAAT .
Maybe we can still push it to “official” eventually