As you may be aware we released the OnePlus Nord avicci as a pre installed device on our eSolution Shop. The dev and stable builds for the device are now available.

A new version of the apps store is undergoing testing. This is the list of changes coming as part of the new version

This is still in its early stages. Issues need to be assigned to the set for release along with v0.20. ETA as yet not decided.

On track
ETA : This week

Update 18 Nove /e/R v0.19 builds are being tested and should be released end of this week.

@Manoj can you give an update on the devices on the release list which are in status buil failed and have no designated release week allocated?

Yes it is on track… just updated in the main thread. Will update once I have more details.

The team is working on porting them. Where possible we will add them to future weeks release cycle. If there are serious issues as in we are unable to build for a particular device despite our best efforts, I shall share the details in these updates.

This is still in its early stages. Issues need to be assigned to the set for release along with v0.20. ETA as yet not decided.

We are breaking up the v0.20 into multiple small sprints or development cycles.The final release would one single build

I’m happy to hear that the App Store is getting some love, this was definitely needed.

Is it known when 0.19 R will be released for my oneplus 5? I can’t quite get my head around when something is released.

The /e/ R v0.19 builds had some issues which required some additional testing. The test results look promising. Expect to release them end of this week… 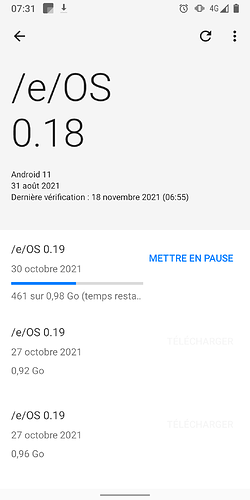 Hi,
There are multiple v0.19R update avalable (at leat for FP3). Should we install only the latest or should we install all updates from the oldest to the newest ?
Thanks

You can choose only one ! but which one ?
be careful, “the last is not the least”, even if fixes are merged, they can have unexpected collaterals effect s
That’s why stable realease is always delayed

I had the same behavior this morning (multiple updates). I did refresh the updater and they all gone… (No update available)

Perhaps all were buggy !

Always pick up the latest build. It will have the fixes from the previous builds.

I just installed the latest release on my Samsung S9. Now the phone will not unlock. As soon as I draw the (correct) security pattern, I get back to the lock screen. I cannot use my phone anymore, at all.

Indeed, when I checked that the latest ROM was still the current through ecloud.global, I realized that all the updates shown in the updater should be wrong for my device. So I just refresh the updater and they disappeared. Install a wrong build may make the device unusable.
Hope you will be able to restore your data.

Thank you for the tips. The problem is that this new release encrypted my device at the first boot (without asking). Now when I boot in recovery mode, it asks for a password to decrypt data. Since I did not enter any password, I don’t know what the password could be.

In short, this release behaves like a ransomware, except it does not ask for any ransom.

This is annoying indeed. I’m not enough skilled to help you further.
Maybe put your device in fastboot mode and reflash TWRP + ROM from your PC (?)
But all your data will be lost.
Or wait for better advises from advanced users…