Bliss Launcher: how does it work

OK,
So I was using lawnchair as a powerful and simple launcher up to now.
However, I’m trying to remove as much unupdated app leading me to try to use Bliss.
And as much as I love the idea of a degooglify phone, Bliss is so far a pain in the butt.
“widget” page is too limited :

basic function such as:

If I would have to choose I would say that widget are the most usefull thing in Android and makes it what it is, having such a reduce set of functionnality over widget is bad, if I wanted an IPhone or a Miui I would have use that…

Anyway sorry for the rant the project is awesome and I hope it get better and better.
As an overall improvement I would love to have all default app available in dark theme.

Bliss is patronizing with its unremovable Weather widget and the suggested apps bar. (I wrote about that.)

I use the Mi Launcher now which solves the most of these problems. Until now I found only one missing thing in Mi: it doesn’t display message counter numbers on the icons of Mail and Message. This is a Pro feature.

BTW: You can download additional widgets in Apps. If you need a Calendar you can find several.

What I didn’t found is a widget which shows the next upcoming calendar events as a dynamic list of items. There’s only cLook and this displays always the damned clock on top and the calendar items are only visible when the widget is much bigger than needed.

It’s all a matter of personal taste. /e/ can never make everybody happy regarding to the default launcher. Personally i dislike widgets because too me it is a big mess. I like bliss, except the weather widget.

Bliss Launcher is a really worst launcher. OK apple /iPhone user would like it, but as basic android launcher features are not implemented/working the best way is to install a better launcher direct after flashing eOS.

Bliss is the first launcher that makes Android usable

I tried to use it, during my seven last install (three days): even with the fewest third party apps as possible, config is just hell! Needs much more swipe and tap to access settings…

well, I guess it’s all a matter of taste, I would describe it as way too simple,
I love to have two widgets for calendar and email and that’s all.
I don’t use app icon appart from sms browser camera and phone app/

Is someone knows if @amitkma or/and some others /e/ développers still works on a new refounded version of the BlissLauncher and when a release will be possible ?
I like his icon apps folders, i can use it on my s4mini and s4, awaiting it will be fixed and improved with new features (why not by intégrating some parts of code from others open source projets), but i can’t use it on my unofficial Galax/e/Tab 2
.
Thanks.

As far as I know there should be released some enhancements in Bliss. But when. … only the stars would know.

But this apl folders are working on every Android launchers. So why don’t use a better / different launcher?

and I like to feel the provocation/joke : the iOS look, on a small Samsung device (s4mini/2013) running android 9.0 without Gogol 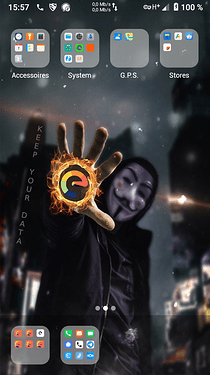 Ah, ok, I’m not suchva ‘product junkie’. I don’t need to shiw everywhere the trademark. I like it more anonymus. That’s why I have removed all trademarks on my builds.

Yes @amitkma is working on a complete rework of the code base. Will check with him and update on any ETA if available. You can read about some of the features planned here

Hi All!
I’m a new /e/OS user on my Fairphone (I used to stock motorola x4 android).

How can I take a direct call icon on the main screen? Is it possible or I change my launcher?
Thanks.

How can I take a direct call icon on the main screen?

Hi, open Contacts, click on the contact you want, 3 dots on the top right and “Create shortcut”. It’s not a direct call but it’s still quicker.

You could also “Add a favorite” in the Phone app, and it does a direct call to want selected contact/number.

I did it what you said before I wrote the post.
I hope in the future will be work.
Thanks.