VLC or YouTube app ( I know it is not to be mentioned on this forum) work and let you cast to a non - SmartTV . I tested it some time back. Netflix app does not work on /e/ not sure if it is a MicroG issue or app issue. I tested on a Pie build.

do you mean VLC and youtube work with Chromecast? Or another form of casting?

It worked with Chromecast

VLC is the only app that see my Google chromecast and works.
I’m using a Xiaomi Redmi 3s. I have tested both /e/ os and microg ROM.

both /e/ os and microg ROM.

Ähhm, eOS is a microG rom, or better it’s including microG. So what do you mean ?

I have chosen to use this last ROM for now.
Drowback…no ways to sync /e/ account.

So, you’ll better continue to use the /e/ os ROM.

Sorry, still don’t understand point 2. Sure LineageOS with microG comes without gapps and without e-apps.

But anyway, if you want use eOS pie you may have a look here Test Pie Builds for the Redmis 3S 'land'

I wasn’t aware of that.

Nevertheless, whatever the ROM, without gapps, only VLC can cast on my Google chromecast.

That was the first topic.

Yes, that’s right. Streaming to Chromecast is not easy without play services

hi all,
i used to have a Chromecast, i just moved to Roku, because i transferred to /e/ . I have to say it works really well, much better than the Chromecast, can really recommend it

In my experience, the app “bubble upnp” running under /e/OS can also connect to Chromecast. Bubble runs in the background and other apps (e.g. arte-tv) share their content via bubble. This works (at least for the arte app) very well and comfortable.

I’ve used /e/ since about… well, my original post here. And lack of Chromecast support is the major drawback for me. For me, it would be the reason not to recommend /e/. Don’t get me wrong, I think it’s terrible that this vendor lock in happens with the Chromecast and I’m really much more in favour of open source and open standards, but since some apps only support Chromecast, this is an important issue for the usability of /e/, nonetheless. I’ve not switched back to Lineage because I’ve also got a phone from work which I’m not allowed to root and flash anyway, so I’ve essentially still got Chromecast support. But would rather not “solve” it this way.

Therefore I find it very interesting to see that the Bubble upnp app which @frank.bxl speaks of, does indeed support Chromecast. For developpers it may really be worth looking into why this particular app works and whether workarounds may be possible based on this. Does anyone know how important this issue is?

@Rik does Roku support the NPO app? (From your name I got you might be Dutch, your profile confirmed this, so thought you might use NPO haha). Because that might be a good alternative, to still also get rid of Google and not need Chromecast support.

i don’t know, but i’ll check for you!

as I read in this thread, the VLC player is also able to find and connect to chromecast with inbuild methods. Are both, the bubble upnp and the VLC player closed source? If not, the code may give a hint to do the trick - I’m not able to say, sorry…

Right, that’s a good suggestion. The VLC app is definitely open source. I don’t know about that Bubble app, had never heard of it before. However, I’m not a developer and I don’t know how to code. I’m more an os hobbyist spending some spare time on Android, E and Linux. Maybe some /e/developers would be interested in pursuing this?

Just my two cents.
My Motorola G 2014 (titan) can only connect to Chromecast using VLC (the F-Droid app).
I use the Local Area Network option with ssh to my LAN server where I keep my music and movies stored.
Works like a charm.

This week I’ve discovered that I’ve got quite a good alternative setup for the Chromecast for those that have a Kodi machine. For years, even before I had the Chromecast, I’ve had a little media machine running LibreElec, a mini os based on Linux with just Kodi. It has all my media in libraries, but can also run so-called addons, apps for Kodi.

I already had a unofficial Netflix addon and an addon called Retrospect which features all kinds of regional and national broadcasting, amongst others the Dutch NPO. However, for me these addons never quite formed a good alternative, since I just really liked browsing in the app on my phone and then ‘casting’ it to the tv while being able to start and stop on my phone. Also, them working well was very depended on the Kodi theme used, and my preferred theme did not support it well. I was aware that there were remote apps, like the official and the unofficial Yatse. But this week I discovered that you can browse these addons from your phone and then click to play them on your tv. After, you’re still able to pause, stop and search from the player on your phone via such a remote app.

I’ll be testing in the coming weeks whether this is stable enough to replace my Chromecast with something I already had up and running. It seems to be a viable alternative. So maybe someone making the switch to /e/ that already has a Libreelec/Kodi setup might be helped with this. I’ve added some screenshots to give you an idea.

Nonetheless, I still believe that Chromecast functionality is essential for people switching to /e/, but this seems to work for now.

In regards to VLC and the Bubble app working while Spotify and Netflix don’t, I think this has to do with the fact that the former play local files, whereas Spotify, Netflix and the NPO app somehow send a link to the Chromecast or something. But maybe someone more technically skilled can shine a light on this. 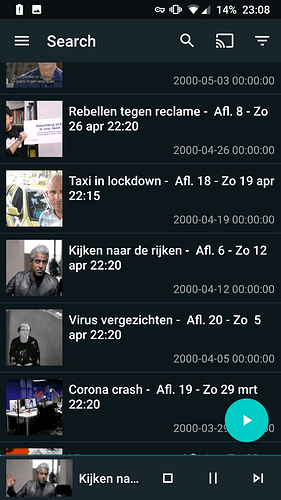 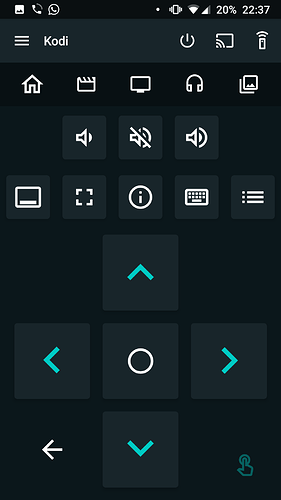 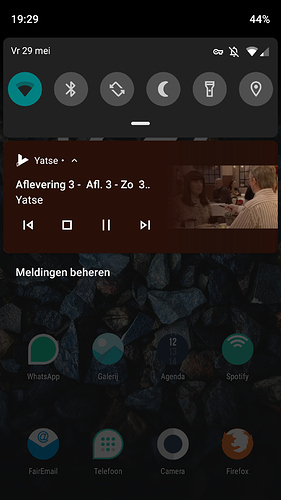 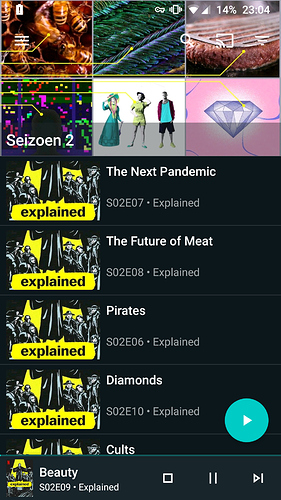 I promised above I’d report back about my progress and experience of replacing my Chromecast with addons on Kodi, which in my case is running on Librelec, a minimal Linux os which simply boots Kodi.

In the meantime I’ve managed to get the Netflix and Dutch national broadcasting service NPO, as well as Spotify and Youtube to work properly. Although at first I did this via the extensions menu of Yatse, a Kodi remote, I’ve now also got a good setup on Kodi, which works well (and is quite good-looking). In the following I’ll demonstrate some possibilities, which to an extent mimic Chromecast functionality. They may benefit current or future users of /e/, who may like me be struggling with missing Chromecast functionality. I can conclude after two weeks that this setup seems to have replaced the Chromecast for me, which also means I’ve succesfully displaced pretty much all Google products.

Spotify
Firstly, Spotify. With an unofficial addon I’ve managed to get Spotify working on Kodi. One needs a Spotify subscription and after logging in you can stream music on Spotify. Besides Spotify functionality, it is also possible to use Spotify connect, which means that by selecting Kodi on your phone, you can select music to play from your phone on your Kodi device, or control it from your computer. Although my experience so far is that it is a bit buggy sometimes, this is a cool feature. Nonetheless, already being able to stream from Spotify on my tv and sound system is a good step towards replacing the Chromecast, in my case. 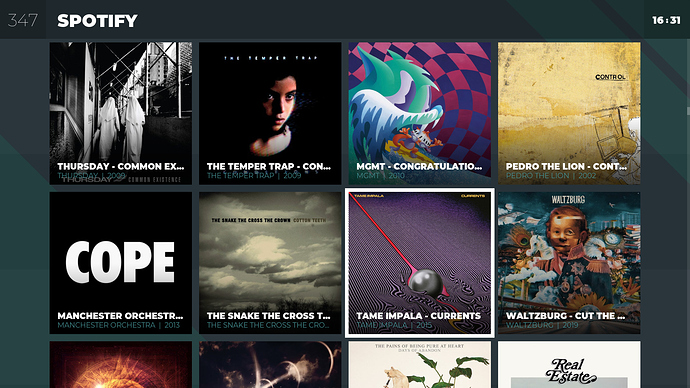 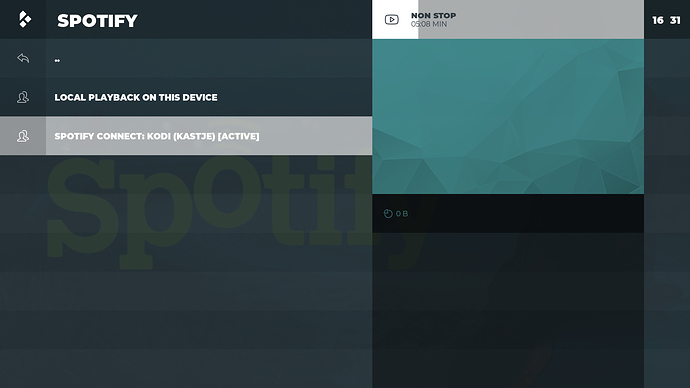 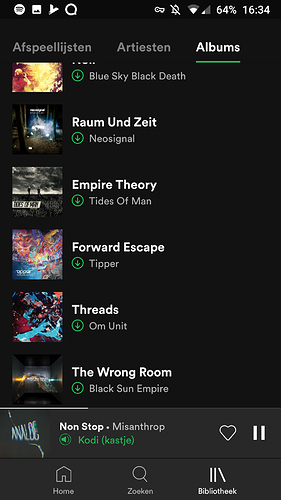 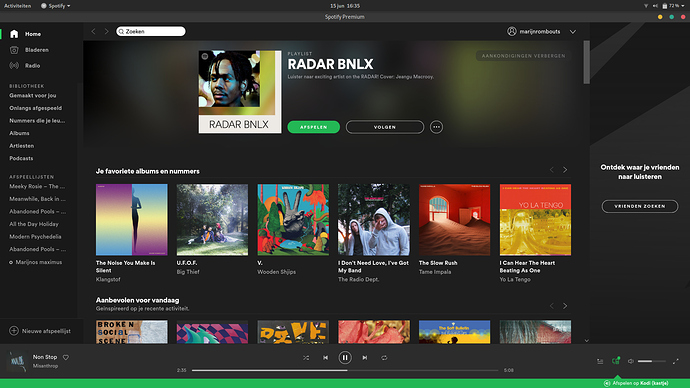 Youtube
Although it was a bit of a hassle to setup, I’ve managed to get the Youtube addon running on Kodi. It requires an API which you need to setup yourself (meaning you’re still using a google product), but afterwards you can use Youtube, without even having to login.

As an additional “bonus”, since I didn’t expect to get this feature, I accidentally found out this morning that the open source Youtube application Newpipe, combined with the Yatse app, make it possible to share videos to Kodi. When clicking the share button in Newpipe, Yatse offers the feature to “play on mediacentre” (“afspelen op mediacenter” in Dutch), which actually works, thereby perfectly mimicking Chromecast functionality. I’ve not added screenshots of Youtube (it’s just youtube, I guess), but I’ve added the option to share that way. 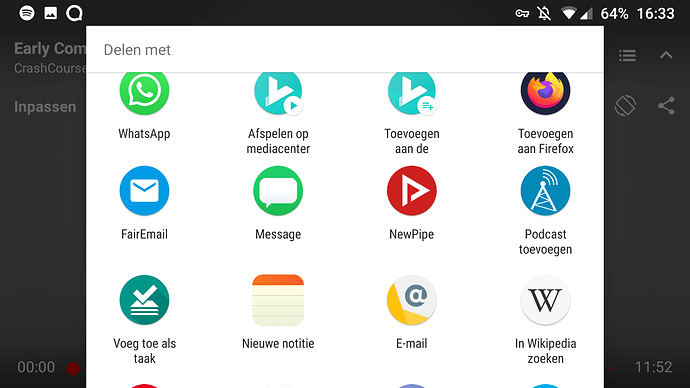 As mentioned in the previous post, Retrospect is a Kodi addon which features all kinds of regional and national broadcasting services. I use it to watch NPO content. Where in my previous post I suggested to use it through the Yatse remote app, meanwhile I’ve figured out it can also be used nicely from Kodi, where it would look something like this. 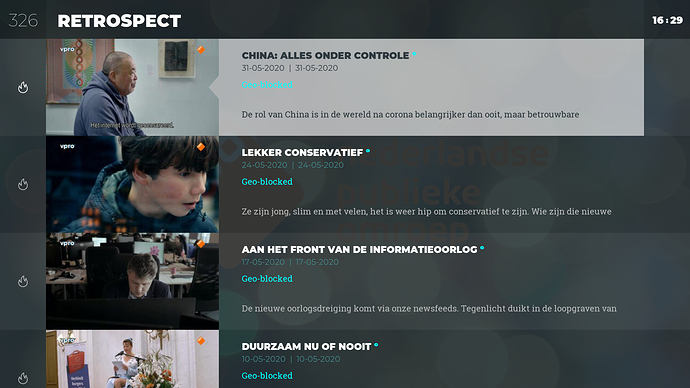 screenshot0351920×1080 382 KB
Screenshot from the Retrospect addon, running on Kodi. For screenshot of Retrospect working from Yatse, see previous post on this topic

If anyone would specifically want the Chromecast-feel of using it from a phone, Yatse works well to navigate through the addon via the phone (see previous post), but it can also be done through Kodi menus where themes apply, giving it a tv experience.

Netflix
The unoffial Netflix addon on Kodi is not supported by all Kodi themes, which I first worked around by using the Yatse extension option (see previous post). But now I’ve managed to nicely set it up with a TV interface. As with Spotify, a subscription is required, but then you can make use of Netflix from the app or browser. For example, I add things to my list while browsing on my phone and can then play those from the Kodi addon. 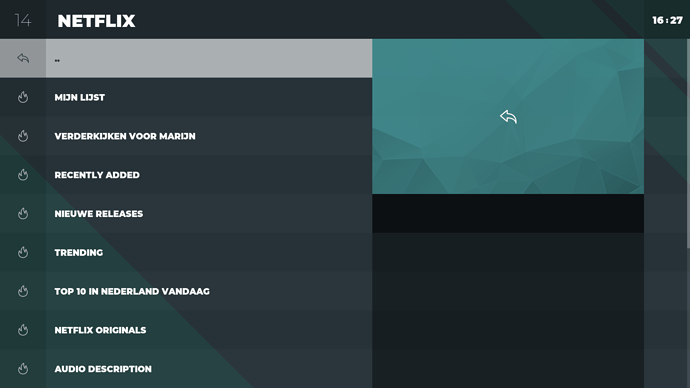 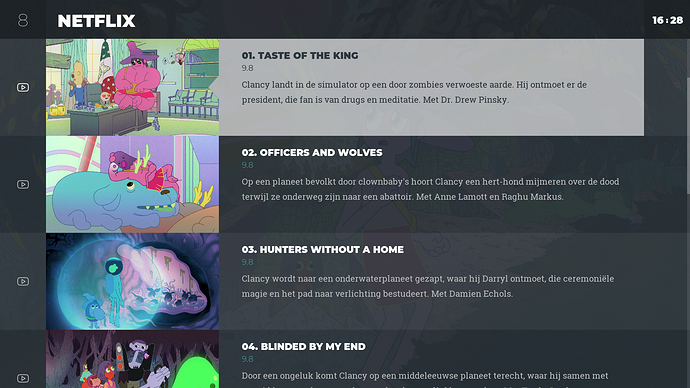 With both the Spotify and Netflix addon, it seems as if listening and viewing statistic are not shared with the respective services. This on the one hand means more data kept to yourself, but on the other hand it may be a nuisance, since it means that this may impact recommendations, for example. I’ve been using Last.fm for years, so I’ve added the Last.fm addon on Kodi, but this may be a note to users.

If you’ve got any questions or want some help getting this to work similarly and you get stuck when following online guides, wikis and tutorials, I might be able to help out a bit. I at least wanted to share an alternative to the Chromecast, which was really embedded in may daily life by means of the services here mentioned. Having succesfully replaced the Chromecast feels like a big win