Coming from LineageOS for microG

Hi,
I installed /e/ on my spare phone because I look for an OS with your attitude towards privacy and Google and to test if I prefer it from LineageOS for microG and can recommend it to friends who use stock ROMs by now.

That apps bought from Play Store cannot be installed makes /e/ currently not recommendable to normal users. Unfortunately I don’t know a solution that is usable for such users.
I use F-Droid and Aurora Store to get any app I want without the need to suggest it to the /e/ store and to wait for updates longer than in the other stores. I don’t understand why you added this app store instead of a combination of F-Droid and Aurora Store (as system apps like /e/ Apps). (Additional feature: F-Droid allows to add non standard repositories). Thus I can at least install bought apps that currently work with Aurora Store.
Additionally I installed the patched Play Store from shadow53 to install bought apps that need license verification, after installing the apps the Play Store can be frozen. Updates can be accomplished via Aurora Store.

I don’t see any advantage of the /e/ launcher. Actually it simply has less features. Trebuchet 16 has features I don’t like any more, that’s why I switched to Nova Launcher, now also on /e/.

I cannot find the equalizer AudioFx from LineageOS or a replacement. Has it been removed on /e/? If so, why?

A fantastic feature. (I don’t need it because I synchronize my phone with my PC,) but definitely a seducing feature for many users.

Now all work of the e.foundation dev’s are wasted. Now you have a goolag phone back. With this configuration you could also stay on lineage.

The apps store has bugs and you will find a lot of posts regarding it.

I agree, the bliss launcher is …’… but you can replace it very easy, as you have done

AudioFx is missing, yes. I think it’s closed sources. That’s the reason I think.
But as all other apps, you can install it by your own. So no big issue.

@harvey186 , I am grateful for every helpful answer. Yours I don’t perceive as helpful. My post is not about discussing what are “big issues” but simply my perception what is not ready for normal users as I have several among my friends.
And I’d be grateful if you stopped reacting on the words “Play Store” like an angry wasp. You repeated your opinion in my previous thread and in other threads several times already. I heard you. I will continue my testing an workarounds. For me this is enough.

I feel you are in the wrong place if your intention is to use play store and associated g-services sorry. From from I understand the whole ethos behind /e/ is to break free from googles grip on your data/phone/life etc.

Sorry, but I haven’t seen any question for help your post. Only statements, and wrong way solutions. That’s why I have answered.

I’m here to help on issues with eOS and help people to go away from googlag.

If people using eOS with goolag store there is something wrong, because it seems they haven’t understand the phylosophy of eOS and I will try to open there eyes to understand for what eOS stand and how they smash it.

So if you have any issues with eOS, if something not working, or do you need help for leaving goolag behind you and if you want have privacy, please ask.

You even said it yourself? But still flash play store… Counter intuitive to /e/ goals. I personally burned quite a number of ‘paid’ apps etc when dropping all google from my life some time ago. I have found suitable foss and tracker free apps to take their place no problem. It’s just some small adjustment period.

I’m using Lineage with microG since /e/ is not supported by my phone (moto g6 play) and the unofficial GSI build is not mantained, and i can do pretty much the same thing /e/ does, you just have to get rid of the remaining trackers and get some apps from /e/ which are forks untracked and ungoogled, actually not a bad thing.

But i will be happy though if i could use /e/ again on my phone (the gsi rom was 99% ok to use, but bluetooth and phone speaker sensor wouldn’t work, so…)

You must know, that eOS is ungoogled on system.base. LOS itself has some goolag calls. If you flash only LOS and monitoring the internet connections, you will see that it is calling.goolag. that’s what e.foundation has removed.

Edit: and what often will be forgotten is, that a lot of apps are not only sending there own collected data hone, no, they collecting the data from ALL apps and send them home. That means, you can block an app, but an unblocked app is able to use collect and use the data ftom the blocked app.

Yes, LineageOS-for-microG (“The full Android experience
without Google Apps”) or LineageOS “microG ready” with “Signature Spoofing support” are a good alternative ROMS for freedom and privacy, if a device isn’t supported by /e/ OS. Only /e/ is more consistent and the goal is clearly defined: a 100% un-G°°gled and privacy-focused Android™ /e/ OS ROM.

Of course, F-Droid’s alternative FOSS apps do not cover the full spectrum of professional apps. But with a consistent approach to freedom and privacy, a solution will be found. So I agree with @b3pio »It’s just some small adjustment period.«

Yes, i mean i know, but there are ways to stop this. On this very forum it has a list of “apps considered best” and there are all the anti-trackers, tracking-stop, firewalls and apps that shows which trackers every app have, and etc.
Is very comprehensive and helpful.

Yes, that’s what happens to me, i really liked and wanted to use /e/ as my daily rom, but unfortunately i’m not able to. so SINCE this happens, i guess LOS w/ microG and anti-trackers is my best option.

Hopefully i do a device update soon and get myself one which support /e/ then i use it again. Is by far the best ungoogled experience i had on mobile.

Folks keep talking about /e/ goals and whatever but miss the point the OP mentioned regarding Play Store. There are apps one has paid for and some do license checking. He used Setialpha’s patched Play Store so said apps can suceesfully do their check. The store is then frozen, apps continue to function and can be updated via Aurora.
That’s it. Simple. It’s about practicality, not philosophy, /e/ goals, or anything else.
It’s been said before, what one does with the OS is up to the user.

On a semi-related note, I mentioned once about paid themes and icon packs and their license checking. For icon packs it’s the dashboard that does the checking and won’t run if it can’t find the Play Store. That’s okay though if you have capable launcher with a good icon picker. Preferably with a search function like in Lawnchair/Librechair. Icons are fully usable. Sadly, Nova never included a search function.

/e/OS (LineageOS) doesn’t have OMS so Substratum themes are not much of a concern (though Default Dark and Croc work fine). Some testing on another ROM without Play Store or microG even I found that a couple of paid themes do work without license checking. Archangel’s Translucent theme, f.i.

Also, one might want to check XDA Labs as alternate source of getting paid apps. For instance I already owned Lucid launcher from my GApps days but recently found it available via XDA Labs. Purchased the pro version again via that route for use on my Google-free setups. Stuff like that.

XDA Labs as alternate source of getting paid apps

Could the hint »XDA Labs is having trouble with G°°gle Play services« be related to microG?

Interessting. Sorry for my ‘dumb’ question: Who garantee my, that the apps from there are ‘clean’ (like f-droid apps) ?

EDIT: OK, I have installed the app and it has tracker 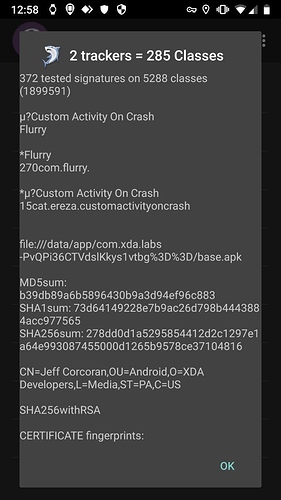 I also have tried a other app from the store and it has also trackers.
Both are removed and the store is nothing for an ungoolged OS, that’s my thought.

Don’t know about the issue, but you can download the apps via webbrowser on PC.

Ah yes, the app uses flurry. I can block/disable that anyway. You might be interested in this exchange from an XDA Labs user, Zwulf(?), about that subject. Dev explains the usage of the trackers but the user wants to know about full functionality sans trackers.

Hey worked! Thanks very much

And yeah, purchases via the web is probably preferable.

@archje, that’s weird. Not aware of any connection to Play Services. Never seen such a message/error before.

That apps bought from Play Store cannot be installed makes /e/ currently not recommendable to normal users. Unfortunately I don’t know a solution that is usable for such users.

Dosen’t Aurora store have the ability to login to it using your Google account?

I agree F-Droid should be included with /e/. Most apps on F-Droid are open source with the user being able to show only apps without closed source dependencies.

Thx, but i don’t mean f-droid. I mean the xda store.

Yes, you can log in the Google account with Aurora Store, but only some bought apps installed this way work, others need special license verification that cannot be supported by Aurora Store.

Sorry, but I haven’t seen any question for help your post.

Wrong: I asked about AudioFx.
Right: My post was meant as feedback. The description for the parent forum says “Share your feedback so we keep making /e/ the best for you!” That’s what I did. Additionally the description of this subforum says that it is not a support category.

I’m here to help on issues with eOS and help people to go away from googlag.

That’s what I did not ask for.

Among the first apps I saw when I opened the /e/ app store were WhatsApp and Facebook. It looks like the /e/ team does not claim to keep phones with /e/ as “pure” as you and @b3pio do.

@marcdw
Thank you for clarifying the contents and focus of my initial post.

the patched Play Store works with microG, not with Play Services.

@Manoj
This is my second post that has been “kidnapped” with discussion what must not be done with /e/ and even who is right or wrong in this forum.
Actually I also seek a perfect de-googled system, but as I know that this is currently not possible for “normal users” who use bought apps, e.g. Threema, I rather seek progress, not perfection.
Currently the posts in my threads make me feel that /e/ users and even /e/ support want to keep this a place for a small community of truth seekers rather than a place to respectfully discuss experience with /e/ and spread the news to as many Android users as possible.
To say it short: I don’t feel welcome here.
What is the intention of the /e/ team for this forum?
Thank you for clarification.