Hey /e/ ! You should degoogle your website before touching Lineage lol 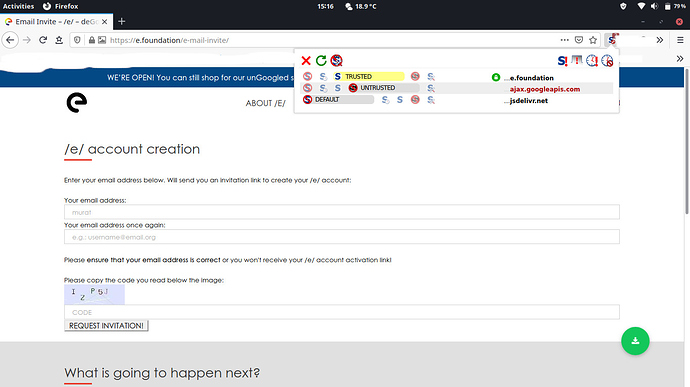 you can use decentraleyes extension if you want to have web api on local
https://decentraleyes.org/

I agree with you that this is kind of paradoxical but the website is unfortunately not the main focus of the /e/-ecosystem.
Anyway, I hope this will be fixed soon.

Gstatic fonts is a known issue since October 2018. This is a newer issue: Google Javascript?

Ok. Sincerely I don’t know why you get gstatic on the e.foundation site but I tested the site on several browsers (Firefox with no extensions profile, safari, Chrome) and in any case I don’t have gstatic. I can’t explain it.

Google fonts are either served over .gstatic or .googleapis

We could have just focused on an OS, but apps and online services are critical components of a smartphone experience, too.

ECOSYSTEM HOW IS IT DIFFERENT APPLICATIONS GET /E/ NEED HELP /e/ is a complete, fully "unGoogled", mobile ecosystem We could have just focused on an OS, but apps and online services

wow what is it with these /e/ haters / trolls… In case you’re listening, dear trolls, please go and find something productive to do, like the /e/ team!

Thanks for raising this point, we agree this is not ideal!
We will release a new version of the website soon and it should remove all these calls to Google APIs.
It is an ongoing battle!

Forget about the site for a while – in the past few months seems like not a single currently supported device has been upgraded to Pie!

Seems you don’t visit the site for few month,
22 devices have been updated to pie

But I’ve been tracking THIS THREAD regularly, and it’s almost dead for two full months now.

I think the FairPhone 3 release was a big thing,

We also have seen the beta easy-installer release,
and seen the app-installer v2 realease.

awaiting the Bliss-Launcher v2 release.
And you are right the upgrade of most of the devices to pie.
And a real integrated tracker blocker
And a official version without microG
And the v1 OS release.
And the new name.
And the official tablet support
And the messy come back.
Etc…

wow what is it with these /e/ haters / trolls… In case you’re listening, dear trolls, please go and find something productive to do, like the /e/ team!

Not trolls or haters - just /e/ community members who like the author productively highlight security, data privacy and other meaningful relevant content in their posts rather than posting meaningless unresearched highly misleading graphics (infographics) that do not add to the topic under discussion; unlike the graphic at the top by @whatisthis, the author. Cheerleaders and the usual predictable likers add nothing of use – I trust they only play to a very limited audience. Thanks to @Manoj for reiterating and reposting my meaningful concerns that you did not answer.

haha what is it with these people who try to discredit /e/ …?

Netguard as a safety net around /e/ Data Privacy

Hey @Rik nice graphic - would you like to see my engravings - or infographic? BUT: Can see you have referenced your chosen sources - independent from e, for google listing. From which independent source did you populate the listing for e? Oooops;

Very misleading post if these Official Looking graphics were to influence Noobies or the less tech savvy, cheerleaders etc.

Hello all, as suggested by @HenkK, hereby posting an infographic i made to a new post. What do you think? Perhaps we can all think of useful infographics for/about /e/, in line with everyone’s great work on developing new logo art, new wallpapers, etc! Rik [page01] Regain your privacy! Adopt /e/ the unGoogled mobile OS and online services[phone]

Quote from @Rik - “For the numbers about /e/, i have assumed that the 0’s were the case.” - you are joking?
Priceless unresearched unpoductive content – We ALL know the phrase about assumption – I assume???

Maybe drink a cup of warm milk, and go to bed early?

It’s easier to write trolly / offensive stuff with smileys and bold than to post relevant replies in order to help the community.

…and that’s it.
Please, don’t feed the trolls!
(and close the zoo)

This post was flagged by the community and is temporarily hidden.

This post was flagged by the community and is temporarily hidden.

Haha, that’s funny. Reminds me of how much google’s tentacles reach out. I wish it was black and white, but everything is grey… Unfortunately.

It is what I call a reasonable secure website. These screenshots with “Encrypt all sites eligible” set to ON in HTTPS Everywhere, and I can post this here with the same settings. 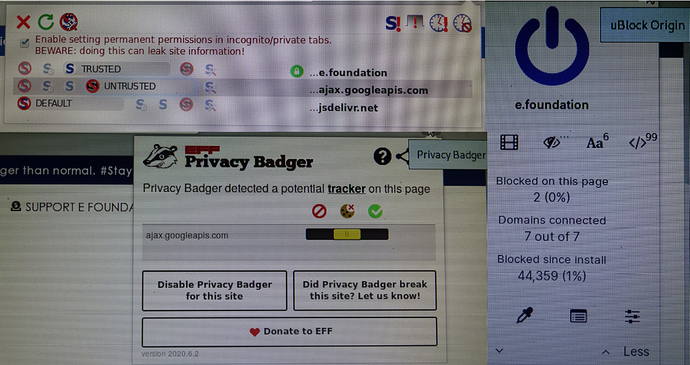