microG - how it works

I would like to ask some questions about project microG. So far I am using LineageOS without it, however I would like to experience /e/ os, however it has microG is preinstalled. I searched a little bit for some more information here and on the Internet and I have some worries regarding it. I found LineageOS for microG website, where they wrote in the installation instruction that the official LineageOS has different os keys so microG will not work. I installed microG repositories from F-droid, however most of the checkboxes where not checked and I was not able to mark them checked. From what I found out, in /e/ all necessary is checked, however as it is a fork of Lineage, does it mean that the necessary os keys are changed so everything works? How this spoofying identity works when it comes to apps like Signal, Protonmail or banking apps where we have to use our real identity and Google notifications are required

Is it possible to turn off microG in /e/ ? I am sorry if I ask for some obvious stuff, but I really would like to understand how it works

All I can say is search the forums. All/most of those questions have been discussed or answered. Some in the past couple of days.

microG, as far as what it is and what it does, you can find some infos below.

MicroG - Wikipedia
Both /e/ and LOS for microG are mentioned.

microG - What you need to know, A conversation with its developer : Marvin Wißfeld /e/ Developers Blog

According to Statista, more than 3,5 billion people use a phone with Google’s Android operating system daily. In just over than 10 years, Android has become the undisputed mobile operating system market leader with over 75% market share. [StatCounter-os_combined-ww-yearly-2009-2020] (source) While Android has a core based on Open Source software, the conventional version of Android that you find on most smartphones also includes a set of proprietary libraries and APIs that are used by many …

Thank you for your answers

I agree that some answers are on the forum, however, do you know if I can successfully turn off microG on /e/ os? Or this will make /e/ to collapse?

I dont use any apps that require g services so I have all microg settings turned off, and /e/ works perfectly for me

If you do rely on apps that use g, then I’d imagine it would somewhat/totally stop those apps from functioning properly. 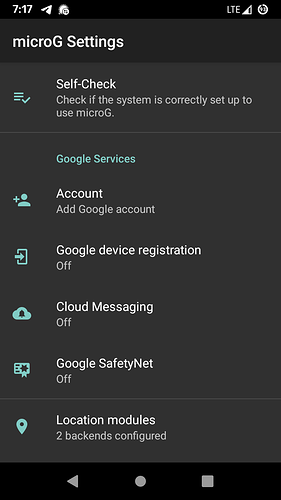 On my daily device, I turned off the 3 features as @mike_from_ireland show, AND in system setting, I deny all autorisations for microG, i forced it to stop and deactivated microG !
all works like a charm…

deny all autorisations for microG, i forced it to stop and deactivated microG

Cheers. Didn’t realise this was necessary, have done this myself now.

Maybe instructions for these simple steps should be standard issue for new people to /e/?

I imagine there are enough people coming to /e/ who dont want or need microg.

just wondering, should the /e/ slogan be " /e/OS is a complete, fully “deGoogled”, mobile ecosystem" if microg is shipped with /e/ as default? Should /e/ come without microg, and then people can add it if they want?

microG as a piece of software has nothing to do with Google, so deGoogled is still fine, imho.

What is bad about microg that people are disabling it?

There is nothing bad about microg, in fact what it does is really a good thing if you need it

.
Personally, I do not have any apps that require g services, and so dont need microg running. I think - although not sure - the default in microg was to have ‘device registration’ set to ‘on’. I didnt like this, I dont want my device registering with anything to do with g, even if anonymously. So i turned off microg, that’s about it.

No. microG is (needs to be) a system app so you can’t just add it. Having it included is fine and needed for those who run apps that need its functionailty (push notifications and whatnot).
As @mike_from_ireland pointed out, maybe some things shouldn’t be on by default such as Device Registration.

I have some ROMs that don’t have microG but use UnifiedNlp for location purposes. Those ROMs in general fit my needs just fine but there were issues with it, especially on Oreo (not registering in the system, thus requiring helpers of the Xposed variety). Plus it’s quite old. As an alternative I’ll set up a ROM with microG but leave all the Google stuff turned off. Essentially providing only location services.

Whether or not certain microG features should be enabled or not by default is an ongoing debate. As you see in the forums, most new or uninitiated users expect things to work out of the box. Having Google Device Registration and Cloud Messaging on by default may make sense. Advanced/technical users know what they want and can quickly disable or turn off some features immediately after ROM installation.

Don’t forgot, folks are always going.on about /e/ for family and grandma/grandpa. Those folks are not going to be looking for features they need to turn on. Heck, even showing my coworkers how to enable Developer Options seems like some hacker action (seriously).

that’s true, most people expect goggly options to work just out of the box, however it is nice to be able to turn it off in the system if you don’t want to use them, choice possible is a wonderful feature of open source software

I have a question. If I disable all in microG settings, am I sure that no information is sent to Google services or Google servers ? Some parts in my settings are grayed for microG or gmscore, is there a way to disable all things who refer to Google in E/os ? I really want a system 100% deGoogled but I want to stay with E/os (which satisfies me).

@piero: You said: “deny all autorisations for microG, i forced it to stop and deactivated microG”
Can you tell me how you do that ? Thanks.

AND in system setting, I deny all autorisations for microG, i forced it to stop and deactivated microG !
all works like a charm…

You are right, it is now greyed and no more mutable using Q or R

I find a way to disable microG. In system settings → App info → microG service core (application) and others microg stuff. I forced to stop and I desactivated microG. Now, I don’t have microG working.