Im using e/os for about 6 months now and still enjoying it. But im wondering if there are more ways to ensure my online privacy.

I now use:
E/os
Mullvad vpn
Protonmail
Signal
Qwant.com
Standard browser that came with e/os.
Only 1 app with Only 2 trackers.

Can i do more than this?
I know that u will never be 100% anonymous on the internet but im sure there are more ways to reduce my digital footprint.

Me again - offering an non-specialist’s suggestions on increasing privacy as I am no expert. As you are probably using an unrooted phone, I think the best app for checking on and blocking trackers is Tracker Control which has been suggested by more knowledgeable people than me. See this post.

Unfortunately you will have to disconnect Mullvad VPN as Tracker Control creates its own VPN connection through which it routes all outgoing traffic to be able to trace outside calls. You could use TC just for a day or so to see which apps are using trackers and then try using Blockada to block specific addresses after switching TC off. In this way you could re-route your traffic through Mullvad which is a serious outfit using encryption to hide your calls.

If you use your browser a lot, I would suggest trying Iceraven which is hardened version of Firefox with “Enhanced Tracking Protection”. You can also add privacy extensions to remove 3rd party cookies and device finger-printing. I also use its containers to keep connections to my bank separate from my other browsing.

I’m not convinced that Qwant is overly privacy-conscious in spite of their claims. I think choosing an instance of Searx and modifying its configuration to choose the searchengines you prefer.

Just my two-cents worth, as they say.

I wonder if it is through FFUpdater that I need to install Iceraven?

@Grendel
I want to send u a pm but i dont know how.
If i click your username i dont see a pm button or so

When you click on a user name you should see a pop up with a button Message on the right side. Click this and you can send a personal message to the user.

Hi @pebcak, as far as I know the only way of getting Iceraven is through the github page of its maintainers. you have to scroll down to the bottom and click on the “assets” button to see the latest version - 1.10 as of this writing. Download the apk and install it.

The maintainers forked a version of Fennec, available in F-Droid, but Iceraven seems to be favoured because it is more adaptable and has dozens of extensions some of which are not available on Firefox. I tried the FFUpdater which says it deals with Iceraven but it didn’t work for me.

There is an interesting video someone posted on youtube which is just a continuous screen grab showing the various possibilities of configuring Iceraven. It goes a bit fast but pausing it at various points you can see how the owner installed various extensions to improve the privacy aspect, some of which were new to me. See what you think.

Im on my phone and cant see it.
There is no message button.
@Grendel, could u send me a pm please?

If you’re using any apps with trackers you can use a separate work profile to further limit the data those apps can collect (things like contacts for example).

@PNJ88_Beast Are you doing this by setting up a new profile in Settings > Users & Accounts > Users > Add User then creating a new profile where you isolate and use only certain apps and restrict info (contacts, calendar, notes, etc.)?

I think @PNJ88_Beast is referring to the way the app Shelter creates a Work profile to prevent apps it contains from sending out information that it would do if installed in your home profile. @harvey186 described how to set up Shelter in order to stop WhatsApp sending out his personal list of contacts. But as he says in this post it’s better to find alternative apps that do the same job if possible.

One useful feature of Shelter is the freeze function which deactivates the app much as Greenify does it, so that means energy saving for your battery.

@Grendel thanks for this clarification, I am new. I found the Shelter app in F-Droid. There are a couple warnings at initial setup… The first relates to MI devices (MIUI) which I am not using but it also cslls out any “custom ROM”. Anything to worry about here utilizing /e/ since it is a custom ROM? 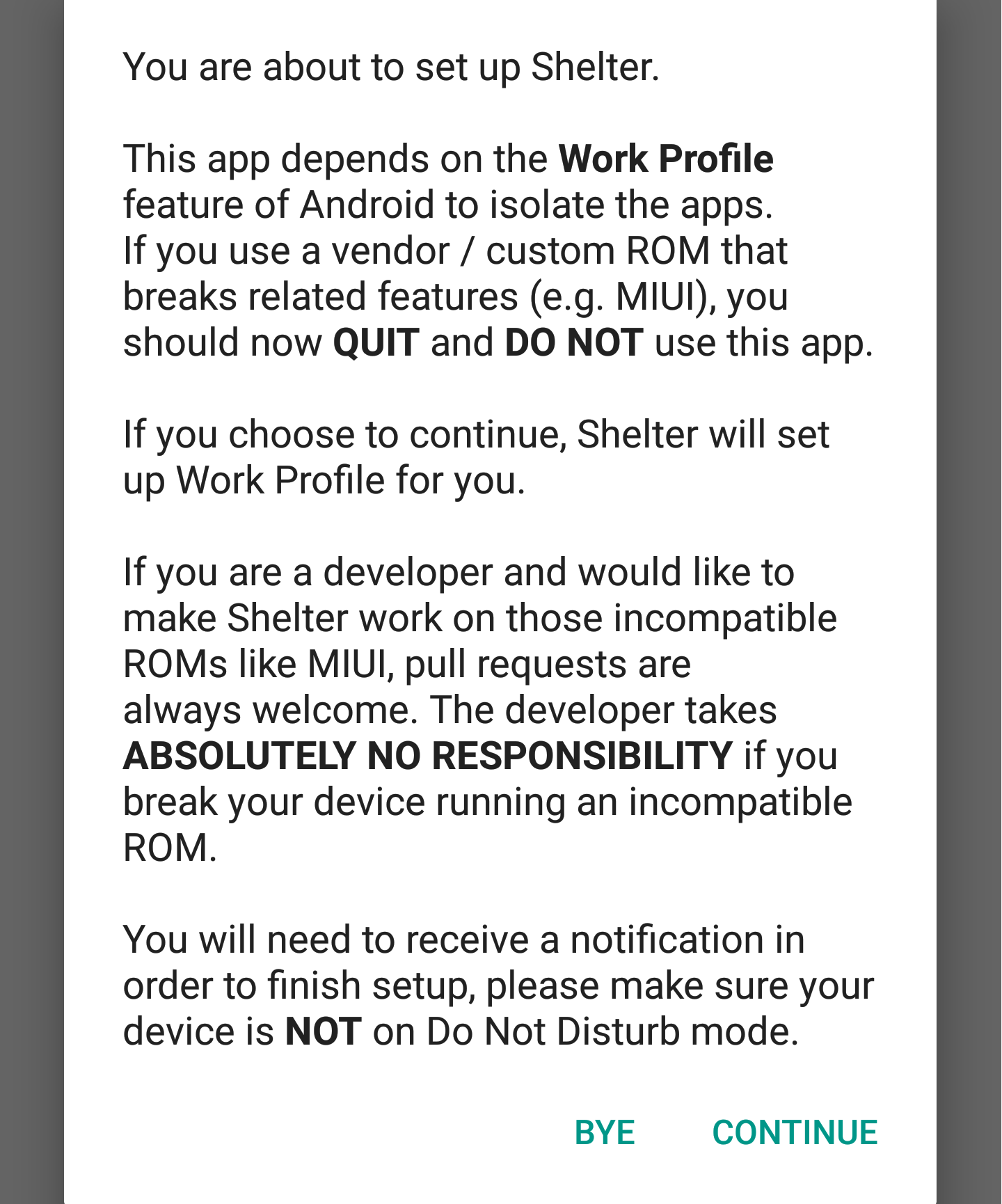 No problem with /e/ as far as I know. There must be a whole host of users who can’t do without social media apps that are full of trackers, so they try to stop them by using Shelter. I can’t guarantee that it works 100% for all. I used it for a while as a friend couldn’t be contacted without WhatsApp. At least it did protect my contacts list as the app didn’t know who I was receiving messages from. Could be a problem if you have lots of WhatsApp contacts

Exactly as @Grendel pointed out, I should have been more specific about Shelter sorry for the confusion. I have been using it just fine under /e/ as well, so it’s probably better to just try it out yourself and see if it works for you. You can take the time to read through the post linked above, there’s a lot of information about how Shelter works and answers to questions that other people had already.

Thanks, I have it installed and am utilizing. I appreciate the info and direction from you both. Sandboxing tools are new to me. I came from iOS and never gave deep thought about how these companies are pillaging our data and privacy.

Are you doing this by setting up a new profile in Settings > Users & Accounts > Users > Add User then creating a new profile where you isolate and use only certain apps and restrict info (contacts, calendar, notes, etc.)?

do the same thing in theory? Create a profile for each, couple apps, to isolate cross tracking data within the current profile? I do see it as less user friendly since you have to switch profiles vs simply opening work tab/apps.

Thank you so much @Grendel for pointing out the Github page for Iceraven.

I got the apk downloaded and installed. Haven’t used it that much yet but by the looks of it appears to be a pretty decent browser.

And I like the set of available addons. Normally I use rather a smal number of addons on my Firefox for desktop and it was nice to see that all of them are available on Iceraven.

Using FF sure worked to update IceRaven following the install. Thanks.

I also use its containers to keep connections to my bank separate from my other browsing.

Thanks for you knowledge @Grendel. Can you (or anyone else reading) explain this a bit more in depth? I am curious on your view as you are more educated than I. What would lead you to IceRaven over Chromium forks like Brave or /e/'s?

There’s a feature native to Android called Work profiles that Shelter manages for you, so it’s easy and convenient to use instead of having to mess with it.

I only have a few apps that I handle under Shelter and it’s just a couple of extra taps on the screen, and for me this is perfectly fine. I guess if you want to isolate every app individually then this approach is not enough, and creating multiple accounts can work best for you. I’m not entirely sure however up to what point each account is isolated from the other or how that affects storage and resources, so you might want to confirm this before hand.

Good feedback. Yes, maybe just a separate 2-3 accounts for the worst offenders that are widely known might boad well for those using Facebook, YouTube (could just use NewPipe), Instagram, LinkedIn (Microsoft), etc. I don’t use any of these “mainstream” apps but it was just an idea. I too don’t even know if doing so fully would isolate cross tracking or any other tracking form but am curious if anyone could confirm. I am now actively using Shelter for a few apps so I appreciate the form members for sharing, greatly appreciated