What key combination to boot into TWRP?

Hi, I’m trying to install TWRP on a Galaxy S9 GM-960F with Heimdall to eventually install /e/OS, but I can’t seem to find the right key combination.
While in download mode I type this (as root on Linux) and it doesn’t give any error:
heimdall flash --RECOVERY twrp-3.6.0_9-1-starlte.img --no-reboot
The problem is finding the right key combination to boot into TWRP.
Then pressing VolDown and Power powers it off, and I immediately switch my finger to VolUp, but with no avail. Sometimes it boots into the default recovery after erasing TWRP, sometimes I wait for the fabled blue text on the top of the screen to release them according to this Howto and this one, but instead it gets stuck in a boot loop (with logo and short vibration several times) until I release them and it then boots into system, and when I boot into recovery it’s still the default one.

Can somebody give precise details on how to do this? I only find vague contradictory descriptions and I’m tired of playing piano with the keys. I can’t understand why there’s such an awful deal of discrepancy and disinformation all around. Even the Easy Installer gets it wrong, telling me to press the Bixby, VolDown and Power key at the same time to get out of Download mode, whereas the device itself clearly tells you to press only VolDown and Power: 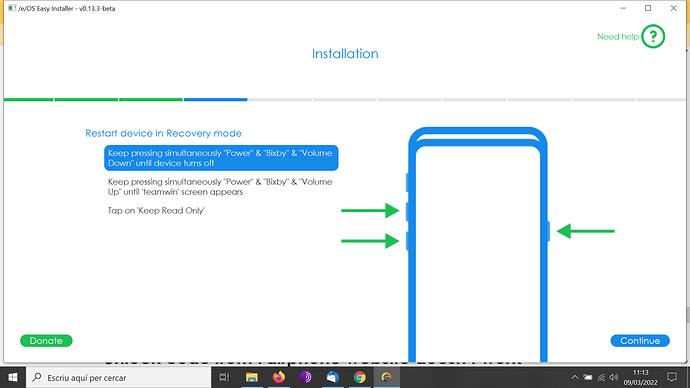 For each device, the key combos should be at the foot of the info page: Info about Samsung Galaxy S9 - starlte. From this I see.

Download :
With the device powered off - hold Volume Down + Bixby + Power.

I wrote an article which I hope answers your questions. Know your hardware - Samsung. Your first boot into TWRP (half way down the contents section) does seem quite contrary at first – do not expect Samsung to cooperate! You are fighting Samsung for control at this stage; once TWRP is installed you are in a stronger position.

Even the Easy Installer gets it wrong,

Thanks for the reply. I didn’t know Samsung’s bootloader was deceiving me to do a soft reset, this should be made clearer, just like timing. Timing is essential in this and it really takes a Rachmaninoff to press the keys and switch with the right tempi. After six attempts I succeeded but still don’t know how to replicate the strokes.

Now the problem is another: nor the Foundation’s documentation nor the community wikis make it clear that you must deny TWRP permission to keep the system read-only and install the patch to circumvent dm-verity as soon as you can. I had to reboot the phone, it complained about being unable to verify and performed a full factory reset. I’M BACK TO SQUARE ONE!

I hope your next run works !