Working remotely ? /e/ makes it easier for you

In order to make remote work easier in those difficult times, we have set up a video-conferencing service, open to all, on a EU-based server with more than 500Mbps bandwidth.
It’s based on Jitsi, and of course, we have set it to ensure full privacy. Feel free to use the service at: https://visio.ecloud.global
Using this URL will automatically create a new room for your own usage. You can also force your own room adding your room name to the end of the URL, like: visio.ecloud.global/my_own_room_name
It can be used using a web browser on any OS, and also on /e/OS using the Jitsi application that is available in the /e/ app installer. Enjoy and stay safe! 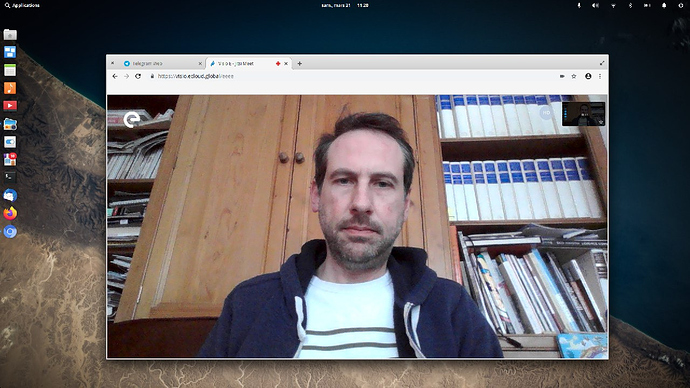 Is this service temporary, or will it remain permanent?

It will be permanent. As it is our team works remotely so we will also be using it frequently.

A small selection of Jitsi-Meet-Instances hosted in Germany:

When you mean “open to all”, you mean that even those who don’t have an account with /e/ will be able to use the service, like the search engine?

Very interesting, thanks for the link.
But why are you not using Nextcloud Talk? This could be integrated in the /e/-ecosystem?

It’s FOSS, you can find the Jitsi-Meet-App on F-Droid.

Nice, but …
to everyone, pls use this video chat only for really needed sessions. The internet is overloaded and everywhere the bandwidth is reduced. In good old times we have had a phone chat without any video. So pls, call your mum, dad, grannys via phone, not via video chat. People who needs fast speed for homeoffice will please you. thx

I disagree with you, it is a hoax to speed up the end of net neutrality.
How does websites like Wikipedia, YouTube, Facebook which have massive influx of visitors everyday still work? Because they are designed for that, and it has not been done for some website, like “Ma classe à la maison” in France, crashed because there are 13M of students not having school anymore, and a good part was connected at the same time on monday, it’s not because you watch Netflix or call granny via video chat.
And ISP know overloads and how to handle them, it happens every year on Christmas period, or big sport events (for example superbowl).
I’ve read some news article, ISP are more concerned about mobile network than internet network.
French telecom federation is asking not to use mobile data if possible, but Wi-Fi.
They also said after Macron talk to French people (followed by 31M people) when he announced lockdown, that mobile calls doubled, leading to some temporary mobile network overload, but not internet network. And there was indeed a heavier load on internet traffic, but there was no overload. The peak internet load in China and Italia was on the first lockdown day, after that the traffic is still bigger, but internet isn’t overloaded.

OK, so … why netflix, amazon prime, youtube and other streaming companies are reduce the quality of the streams

Because ISP / governements ask them.
Do you really think Disney+ wanted to report launch date from 31st march to 7th april in France? No.
See this tweet, from Disney+ France:

A little more patience for our French fans, our Disney+ streaming service is coming soon… but at the request of @GovernmentFR, we have agreed to postpone the launch until Tuesday, April 7, 2020. #DisneyPlus

Mm, I don’t understand that now, but whatever.
Please look again at what GAEL announced: ‘FOR BETTER WORK …’.

Hello
Thank you for this information which is very useful at the moment.
Unfortunately I tried to connect with the url https://visio.ecloud.global from two different systems Linux and Windows 10, without result (waiting time exceeded).
I also tried with my phone \e\ S7 it connects but I can’t figure out how to invite other people. If I give a name like: https://visio.ecloud.global/mon-nom same thing.
Do you have the same problem?
Thank you.

Discover secure and private ways to communicate with others online without letting any third parties read your messages.

for your information:
Today News fromAustrian NewsPaper:
In order to relieve the Internet in the Corona crisis, Facebook and Instagram will now also reduce the image quality of videos in Europe. This was announced on Sunday by a spokesperson for the parent company of the two online networks. Previously, the film and series provider Netflix and the video portal YouTube had already announced similar measures.

What Is the Most Secure Video Conferencing Software?

Now that we can’t meet IRL, is Zoom as good as it gets for video calling?

When trying to connect to https://visio.ecloud.global/ , after a wait of nearly one minute, I get this error message:

"This site can’t be reached

visio.ecloud.global took too long to respond."

There seems to be an issue . Will check with the team and get back if it is due to heavy usage or an issue with the servers.

Great. Thanks again @gael for making a Jitsi-Meet instance available.

I read somewhere else that Jitsi-Meet with its default settings is configured in a way that it is calling Google STUN-servers (in config.js). Just wanted to check whether you were aware of that.

Will pass this on and get a response