Hello people,
So i have installed /E/ in a secondary phone of mine to test it (until the version for oneplus 9 is released)
and realized that i don’t like the iphone luncher style at all.

Do you have any alternative luncher similar to stock android to recommend (specially if it’s independent of google services)?

I’m not much of a launcher guy, and when i find one, I stick to it, but I can recommend Total Launcher. It’s FOSS, and one of the most customizable one. I even sent few € to developer to support hers/his work.

I’ll check it out, thanks!

There are googobs of launchers out there. How you “compute” may determine a suitable candidate. Lawnchair (v11 i think is on F-Droid) or Omega for standard launcher style.
KISS is great for quick, search-based launching. Can also be used as the Assist app so one can launch apps no matter what one is doing.
Discreet launcher is not bad if you like a clean show-off-your-wallpaper but dont’t care about widgets setup.

One can spend quite a bit of time trying what fits you best.

Thanks, i’ll check them out!

I wish there was a big launcher thread/post here that could be reviewed where all people can get the most needed information, regarding the launchers. as an Android user, I personally can’t do that much with the IOS-like Bliss-Launcher. For me, it does not fit at all that all apps are on the home screen.

On my Google android I had Microsoft launcher because I used a lot of MS ecosystem. So I really liked the MS launcher, mainly because it could be kept compact and clean.
In the meantime I scoped out because I’m using Linux again. But I miss the pull-up dock: I hate cluttered screens, it needs to be organized and preferably free of redundancies.

I looked at the following launchers for Android after that:

Open Launcher
I got stuck with this one because it doesn’t have quite as overwhelming of settings. I find it to be quite intuitive to use. The apps are not all on the homescreen, but in the drawer. You can either use a button for it, or swipe up from the dock. I use two widgets; one is Calendar from /e/ + To-Do list widget and the other is Tasks. These work well with the open launcher. Only feature I would like would be that web apps could be installed. So, to get a shortcut to Twitter via Brave browser, so to speak, instead of having to use the app. Unfortunately, these shortcuts do not work with Open Launcher. Privacy rating is quite good.

Total Launcher
I just tried this the other day. There are very many ways to set different things. Visually quite nice, but I didn’t like the handling of the apps. I don’t want to see the apps on one of the homescreens, or search for them with a search function, don’t want to tag them, but swipe-up in an isolated other window. I actually liked the launcher visually though - just having the apps on one of the screens was not desirable to me.

Discreet Launcher
This launcher is pretty nice, because it is very simplistic by design. There is a dock that hangs at the top of the screen. You can design the bar quite freely. You could also group them into folders and hang them in the dock, but then there were only house icons, a bit less design options were possible here. And as Marcdw mentions; widgets do not work in Discreet. Privacy rating is very good.

Lynx Launcher
Only tested very briefly. Can’t say much about it. You also have to load via Aurora, this launcher is unfortunately not available via its own store or F-Droid.

Blloc (Ratio)
Blloq Ratio I would have loved to use, because it is also very simple. It aims a bit at not giving you so much screentime - but that didn’t work for me. I had to learn quite a bit to use this one and the launcher needs quite a lot of permissions to work the way the developers had in mind. The special features are that Ratio splits the screens into three parts. Once “the root”, “the tiles” and “the tree”. At the root you can find notifications, news, widgets. The “tiles” are for the apps (you can tag and declutter and tag them similar to Total Launcher. At the tree you can find a page that are only for messages. Support is there for WhatsApp, Telegram, et cetera. Unfortunately this launcher needs a lot of permissions to work properly. This may not be very privacy friendly.

Posidon
Posidon is a bit like a news site. You can set a feed with news and set a lot of things about it. Didn’t stay on it that long though.

Librechair & Lawnchair
I would like to use one of these two versions. For Lawnchair I could somehow only find alpha versions via Twitter or their Telegram, which confused me a bit. Unfortunately I didn’t find any stable versions. Similarly with Librechair; I was a bit confused that in the Librechair Telegram there was more any news posted concerning Corona than progress to the launcher. There was also some bashing in the Telegram, I don’t know. There were unfortunately a few crashes on my Fairphone 3 with Librechair. On the F-Droid and /e/ store apps of these two launchers it says that the versions are no longer managed - you have to look here either via GitHub or just Telegram, what’s going on. I find it very unfortunate that I could not somehow look through here. I feel like there are no finished products here.

Wow,
amazing list, and thanks for the time you took making a review of everyone of them!!

So, i tried the open launcher, I like it.
I don’t need more than that.

I knew I forgot to mention Lynx. In use on a couple of ROMs. A little nod to GNOME in its design.

Regarding Ratio launcher, the permissions it can use seems about right for the features it offers. Of course there’s no need to grant all if not using certain features (that use contacts, calendar, camera, etc.). But as you state, need all to get all.
It has only three trackers, two are Mixpanel (selve-serve analytics, source on github).

Their description claims privacy, that everything is local, no 3rd party services, etc. etc. I don’t know but I may give it a look see.

I really enjoyed Ratio. I would have liked to stay with it, but there were a few features that I found lacking. One was the interopability via the widgets, which work well with /e/ respectively Nextcloud (which I really appreciate). The integrated “root” widgets were then somehow nothing for my kind of handling. The second was the “Tree” and that I could only use Telegram there, no Signal, no Delta.Mail or Rocket.Chat. I don’t use WhatsApp anymore. But otherwise I really liked the launcher from the design and its innovation

Omega Launcher (Your powerful libre launcher with a lot of smart features.) - https://f-droid.org/packages/com.saggitt.omega

It is a stylish and functional launcher.

The link leads to 404 Page Not Found.

Yep. Omega is, if I’m not mistaken, from the dev of Zim Launcher (a mashup of OpenLauncher and Lawnchair). Been following its development from the beginning. Was bummed out that the early stuff would not run on Nougat. Been using it on /e/OS Pie though. Was pleased when it finally made it to F-Droid.
It still has some minor issues, like the newest version has problems with manual icon associations. The Dash popup could be useful for those who normally make use of Quick Settings tiles. I decided to add an app drawer button to the dock and use swipe-up gesture to bring up Dash.

Hi,
Im using OpenLauncher with /e/ Unofficial.
can you tell me whethere should i change my Lanuche rot Omega.
I want functions, energy efficiancy and a Live Project.
Please share me your knowledge.

It took me a second to realize the 404 problem. Omega is not available from the F-Droid repo but instead via IzzyOnDroid repo. Thus F-Droid would not have a page for it.
So I will say that maybe the F-Droid app’s share button will automatically generate an F-Droid site link for any app displayed.
For instance, I brought up the Bromite browser in F-Droid. It’s from the Bromite repo. Using the share button also produced a 404.

So the share button is only good for apps provided by the F-Droid people.

Here is the IzzyOnDroid repo link for Omega Launcher.

I can not find comparision between OpenLancher and Omega.
Can you compare both?
Features, energy and Active status wise?
Thanks in advance

I really couldn’t say to be honest. Omega is based on the latest Lawnchair code. It has more features, probably works much better with recent/current Android. Development is active.

OpenLauncher is simpler, not based on any existing launchers, and is probably much lighter in resources. Development is slow. Only two releases in the year 2020.

I had recently setup a Nougat ROM to be minimal. This time around I wanted a standard launcher where I would only have widgets on the home screen. No icons and no dock. Discreet launcher would’ve been ideal if it supported widgets but it does not.
I would then use KISS launcher as my assist app. Favorite apps in a sidebar is handled by OmniSwitch.

OpenLauncher was my first choice as I could turn off the dock. Alas, I hit a snag. I wanted to use an old favorite 24 Hour clock widget. It’s ancient in Android years, from 2013. It seems OpenLauncher can’t handle such an old deal.
Once the widget was put on the screen it couldn’t be manipulated in any way. Can’t resize or move or even long-press on it to remove it. Bah.

After messing with a couple of launchers I went with an old reliable, Lawnchair v1. I use it on another ROM and it does what I need it to do. Could’ve tried v2 but didn’t need to. Anyway, the old clock widget works fine as seen in the screenshot.

I would less compare Omega to OpenLauncher than to other Launcher3/Nexus/Pixel-based such as Lawnchair, Librechair, Shade, Rootless, Lean, and the like.

crDroidAndroid 3.8.8, Nougat. Secondary ROM on Moto G5 Plus potter. I like older Androids. 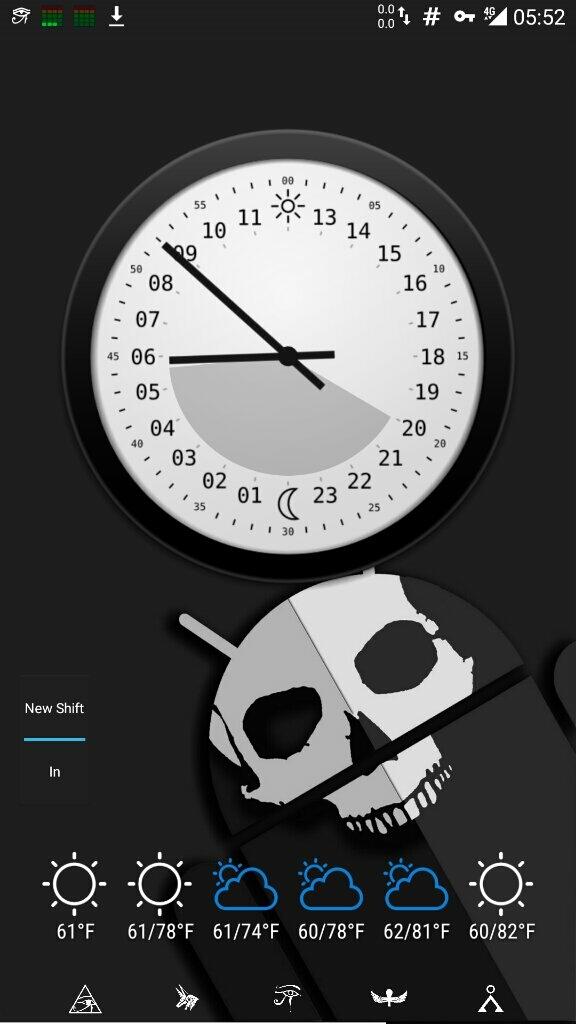 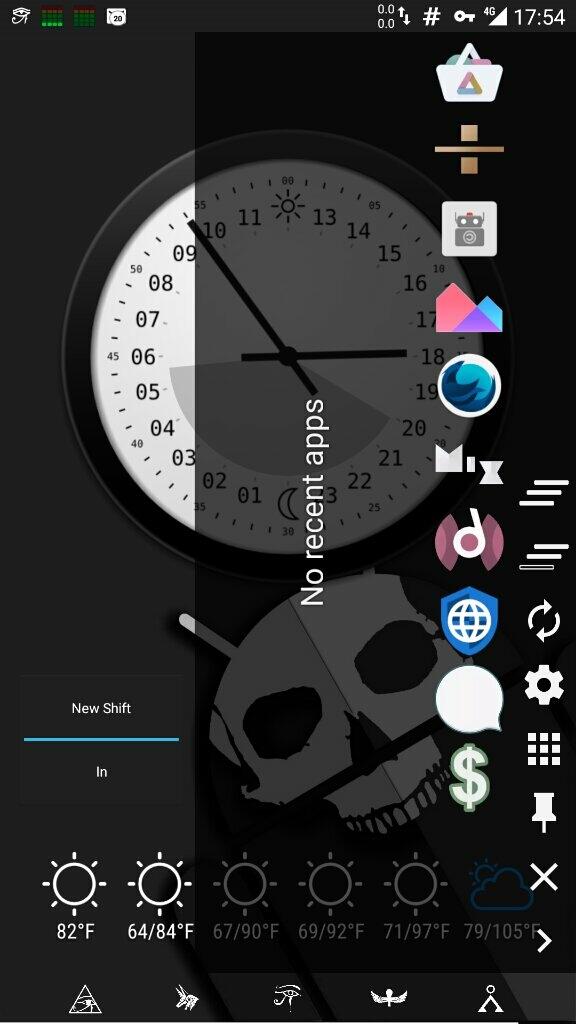 Thanks a lot for your reply.