Exising devices getting an OS Upgrade are

The builds for these devices have yet to be started.

Will update on the progress on this thread.

v0.15 Testing
We have initiated the testing for v0.15 with the help of our testing team.

Updates on eCloud
Couple of months back we conducted a survey where we asked you what apps you would like to see on eCloud.
As part of it we have added a few apps which you can check out on your ecloud
Login in to eCloud go to your Profile > Settings >> Menu on Left Side | App Order
You should see a list like this 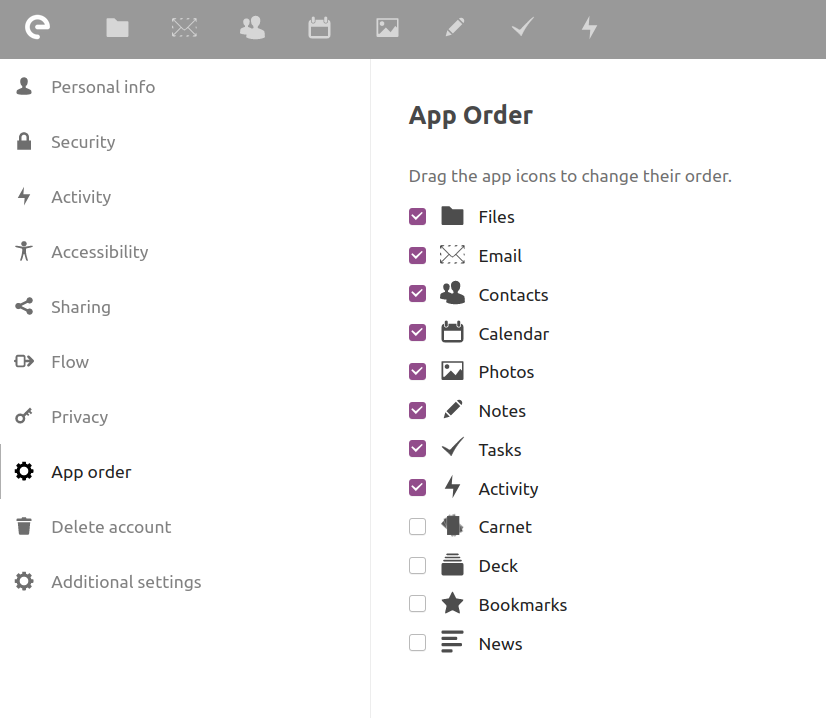 We will be adding more apps based on what you had requested . The team needs to first test them for viability and compatibility with existing /e/ code.
We will be sharing some documentation to explain what each app does.

. To address that issue w/e/ is hiring skilled folks for different positions. If you think you have what it takes to be a part of a dynamic team pl send in your resume.

Modification to the Testing Process
Those of you who have helped with the testing of /e/ are aware that the way we do it involves flashing a test build manually first. Subsequent builds come in OTA. A return to dev build again requires a manual flash the first time.
We are working on a modification by way of which users will get an option in the developer options. There they will get to choose between Stable, Dev and Test builds and the corresponding build will be downloaded on the device. This should make it easier for more users to help with the testing efforts.

Only point to be noted is that the test builds could be unstable and as such not to be flashed if the device is a daily driver. We will share more details on this soon.

8 Likes
Newbie having problems with installing on Samsung S7, device is not found
weichselbaumj February 24, 2021, 11:54am #2


After installing the phone ended up in a bootloop like described here: Galaxy A5 2016 bootloop after OTA update
Hopefully this is fixed with the coming upgrade to Q.
BR, Johann
Manoj February 24, 2021, 12:50pm #3

I have asked the build team to run fresh builds for all the devices which failed during the previous cycles. Will be updating the progress on this thread.

hello
eager to test the build, will it be possible to install it from scratch on a device (i.e. without using OTA upgrade) ? At the moment my phone is running on Android 7.0 Kernel version 3.10.61-13952378.
Thanks in advance for information.

Yes the build will have to be installed from scratch. The version we are trying to build for the A3 is on Android Q . It would require a revert to stock Android 10 for the device and then on top a clean install of the /e/ Q build.

ok how am I supposed to “revert” to Android 10 if my device is only on Android 7.0 ?
are there Android 10 builds available, that I could install on my device (and suppress the other OS installed by default by my operator - not to mention it : Orange) ?
thanks

Revert may be the wrong word here. You will need to flash the Latest Android 10 build for your device if available. This has to be done first before flashing the /e/ Q build. Which ever is the last stock build available for your device.

In the lineageos install instructions for a5y17lte it is required to install the latest Android 8.0 firmware.
However there is nothing similar mentioned for for a3xelte

Unfortunately, Android 7.0 Nougat seems to be the last stock build available for the Samsung SM-A310F Galaxy A3 (2016).

Should I try to install Lineage OS first, instead ?
cf. : https://www.androidinfotech.com/samsung-galaxy-a3-2016-lineage-os-17-1-android-10/

No need to install Lineageos first. Actually /e/OS is a Lineageos fork.
I would suggest to install the latest Version of Android 7.0 stock ROM before installing /e/OS Q. But at your own risk

Thank you weichselbaumj i’ll do that. And yes, I know the risk is on my side of the screen

So many positions. Is there a new investor on board?

However, very glad to hear that e.foundation is evolving.