This week we have an action packed set of updates

The OS and gitlab pipeline where you can track this build are listed below
The devicecodes are given below the OS version.
To check your devicecode type the device name in our Smartphone Selector

Reason for build failure is varied primarily as these devices lack dedicated ROM Maintainers and we lack resources to invest to debug further.
This does not mean we have abandoned these devices. We will allocate resources to work on these issue once they are free from their other tasks.

It was observed that some of these dropped devices are now available as unofficial builds on the forum. It would be great if one of the unofficial device maintainers volunteers to become the ROM Maintainer for these devices. That way we can get them back on the official list.

eCloud sync error Facing sync issues on eCloud ? Log out and log in with your /e/ mail ID and password. There is a change made by the team this week, which prevents logging in with non /e/ credentials.

Thread will be updated during the week

Lack of disk space especially in the case of the jfltexx

Samsung Galaxy S4 (GT-I9505 -jfltexx) works with me with ‘official’ LineageOS 18.1. An 64GB microSDXC can be formatted as an internal storage memory extension and apps can be stored on it. I’ve installed F-Droid and Aurora stores and several dozen FOSS apps, including Magic Earth and OsmAnd+ with plenty of maps stored. The system encryption does not work. In return, the OS runs surprisingly smoothly.

Can confirm the update went smoothly on my FP3.

Thanks for the update

The start up, “There is an internal problem with your device. Please contact your manufacturer” remains, #2840.

Other than this thread, when people run into problems while OTA updating, where will they be discussed? As this is my first OTA on a device that sometimes doesn’t handle OTAs well, I would like to wait a week and observe before upgrading.

Smooth OTA for the S9 from 0.13 to 0.16 as well. One small thing noticed is the update message states ‘your system is being updated to /e/OS 0.13’ (see below) where this must be 0.16. Don’t know if that’s only in the Dutch translation though. Many thanks for the update! 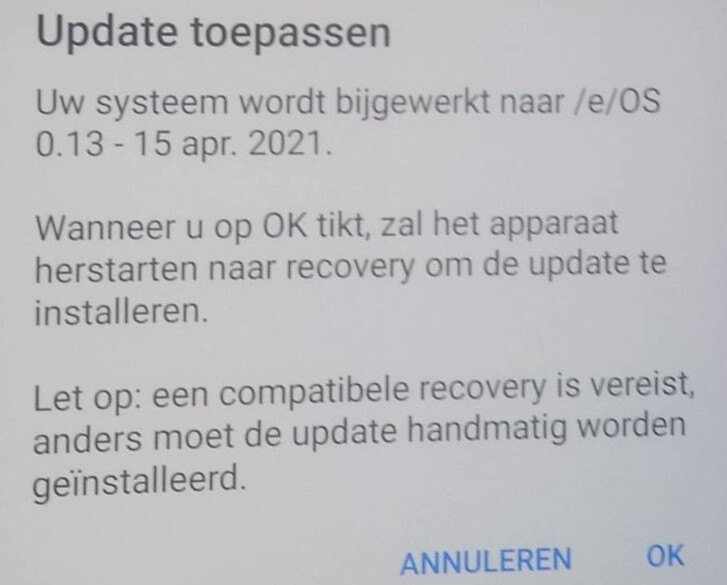 How best to upgrade the /e/ OS

We are working on getting the stable builds upgrade directly to Q…ie. from Oreo to Q .

I was actually using the dev build. Flashed my phone based on Galaxy S9 'starlte' + /e/OS 'Q' dev AOSP Android 10. This is the first time I’ve received an OTA for this. So now my system updater shows the version below.

I rec’d notice of the 0.16 dev build for the S9 today as well. I downloaded but it will need to be installed manually since this device has a TWRP recovery partition. Anyone happen to know which folder the 0.16 /e/OS zip was downloaded to (while searching in TWRP)?

I have a Samsung Galaxy S4 Mini (International LTE) running “serranoltexx” 0.13
No update since [e-0.13-n-2020121089402-dev-serranoltexx.zip]
I have just seen an recent opened issue : “Build in failure for serranoltexx” on gitlab:

I wonder if I can help solve this issue ?
I am quite a newbie, but I can help if I am well managed. I rooted and installed my ROM by myself 2 years ago.

@mcmd I have TWRP too on an S9 and was able to update without any extra/manual steps. I’d just try it and see what happens for you.

I’m going to check later if the stock calendar app still has the bug of too many notifications.

Upgrade failed for me on Sony z5c currently on 0.15 Q. This is my first time attempting an upgrade, so it’s possibly something I’m doing wrong.

Two things I didn’t understand, the update was for 0.16 but the “Apply update” screen said “you are about to upgrade to 0.15”. And the other thing was " this feature requires a compatible recovery or updates will have to be installed manually" - I don’t know what this means or how to go about ensuring I have a compatible recovery. 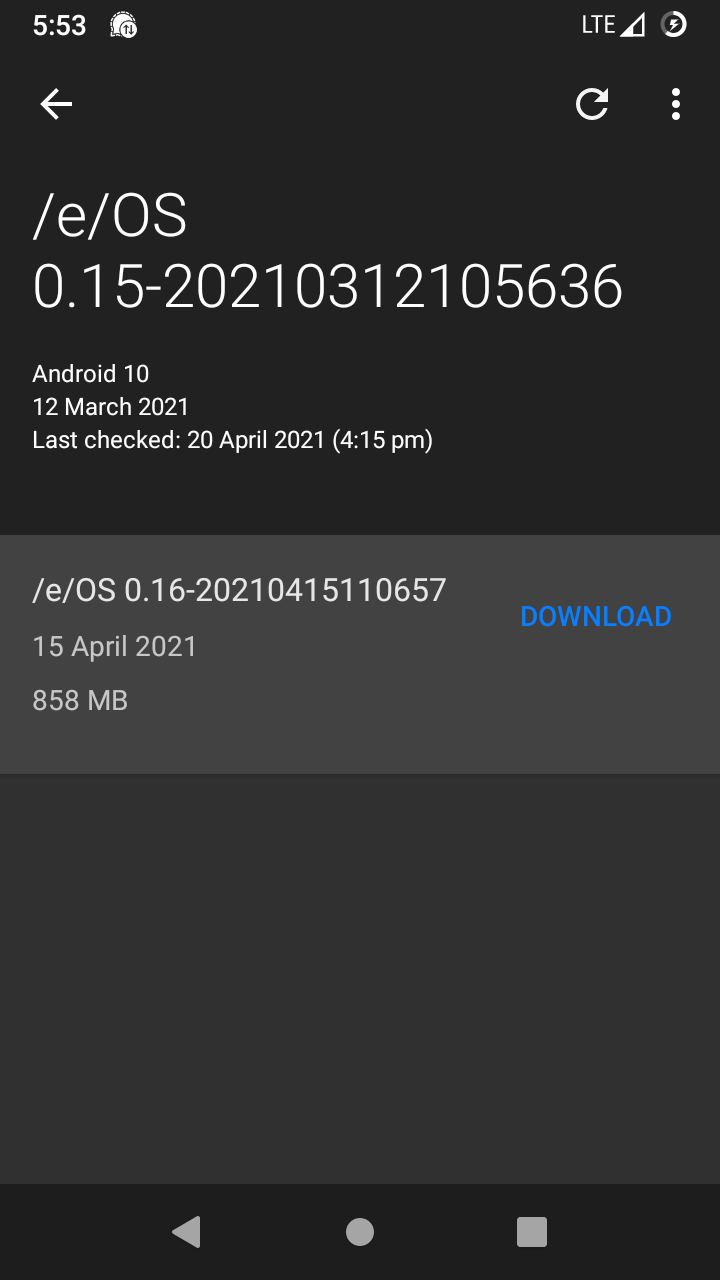 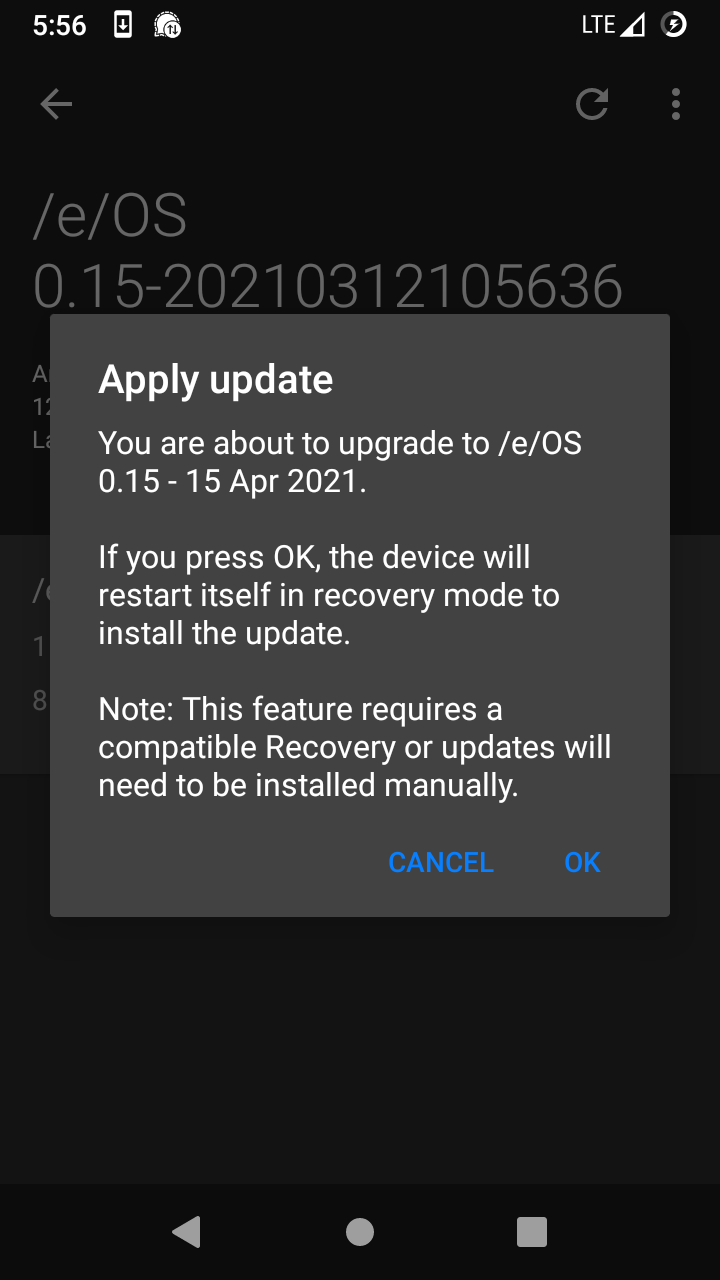 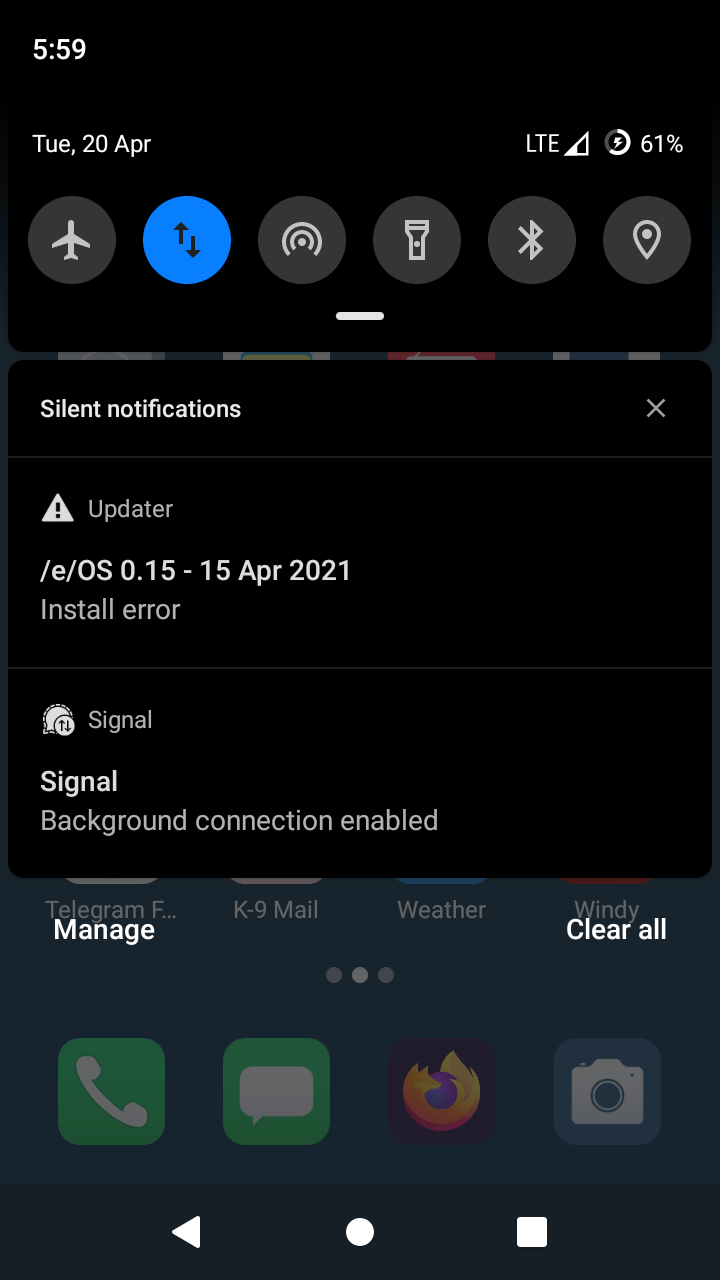 Hi @mike_from_ireland
I’ve just raised an issue in gitlab about this #3014 OTA Update fails to install. The workaround is as follows:

Thanks @petefoth I’ll give that a shot.

@cornfarmer Indeed it worked, thanks! Just as a FYI for anyone else reading this, if your S9 is encrypted and has TWRP loaded, when TWRP loads it will ask for a password- just hit “cancel” and the update will proceed.

Confirmation on my part that the Samsung A3 update to the e-0.19 version went well using a TWRP recovery to flash the new zip file. No problems apart from the Android error message that existed before.

However, the update on my main device - a OnePlus 6 - was much longer than expected. After the initial download there was a progress bar indicating the installation was taking place, but after a second message about “preparing packages” or something to that effect a further progress bar advanced at a snail’s pace and took well over an hour to complete. As there was no reboot to recovery and this is an A/B device I assume that the installation as to the alternative slot and then I was finally able to reboot successfully to the updated version.

However, as I have related separately, this new installation replaces my TWRP recovery with /e/'s own version and unroots the phone. This made a reinstallation of Magisk a major undertaking. See my post.

@petefoth that worked perfectly, thanks.

As always, thanks /e/ team