Click on the .gif-link to see an eight picture animation.

Upgrades & Updatesare good thing in itself, but - Samsung has massively protected the bootloader against changes. That goes so far that after the update due to updates of the security guidelines, the old software can no longer be used (see also Biildanimation Figure #5).

What’s new?
● The security of your device has been improved.
●● After the update, you will no longer be able to use the old software due to security policy updates.

I know the theoretical solution (StockROM Android 8.0.0 Firmware Downgrad to Android 7.0 with its Bootloader, Modem/Baseband update, TWRP Recorvery and /e/ OS install, but is the effort worth the risk? Isn’t it better to wait until the maintainers of the /e/OS Build Team release an upgrade to /e/OS 8-Oero or even /e/OS e-9-Pie?

Switching from StockROM Android to /e/ OS requires above all uncomplicated builds with 9-pie]([UNOFFICIAL BUILD] Samsung Galaxy A5 (2017) (a5y17lte)) and 10-Q in the foreseeable future) and a well-functioning /e/ ecosystem service.

As soon as the installation of /e/OS on the Galaxy A5 ➅ 2017 is done, I will share my experiences here further.

Hi, since there is no easy/safe way to back to nougat bootloader/modem for A5, there is safer/better option - official lineageos 16.0 (android 9 - pie) for A5 2017…
https://download.lineageos.org/a5y17lte
as well as microg version… so, if you want to get rid of google just install:
https://download.lineage.microg.org/a5y17lte/
if you want some apps from play store, you can install aurora store from fdroid and use an anonymous account to login… and you will get access to all play store apps

Hi @runarriot what you’re revealing here is already known to me. We don’t want LineageOS or LineageOS-for-mircoG and certainly no apps from the G°° Play Store, we want /e/ OS. /e/ OS 9-Pie will soon be available for the “a5y17lte”. I’m convinced of that.

The technical process of changing the operating system from StockROM 8.0.0 8 Oereo to /e/ OS e-0.7-n (7-Nougat) would appeal to me to confirm my theoretical knowledge. However, since the phone is not my property, I will not make an enemy of my friend.

The StockROM 8.0.0 with security lease 01 Nov. 2019 is as far as possible free of all pre-installed ballast. When the /e/ OS 9-Pie upgrade is released in the new year, the phone will be equipped with it. We can still wait that long.

I could not resist and curiosity & interest in the matter were greater. Although I didn’t install the official /e/ for a5y17lte dev (nougat) build, I installed two versions of different unofficial 8-Oreo and a 9-Pie build. The final result can be found → here.

I wanted to have a try, but not today…
Tell me when it will be fixed.

Not on stockrom oreo … I think the stock ROM was nougat… Does the stock ROM on the a5y17lte have a FM Radio?

And would you by any chance know if it is there in the lineage 16.0 ROM for this device. Checking as it would be weird if it is missing here as we do not change the build script for individual devices.

And would you by any chance know if it is there in the lineage 16.0 ROM for this device…

Neither LineageOS 16.0 nor LineageOS-16.9-for-microG = No Radio App. This applies to various other Samsung devices of the A series! 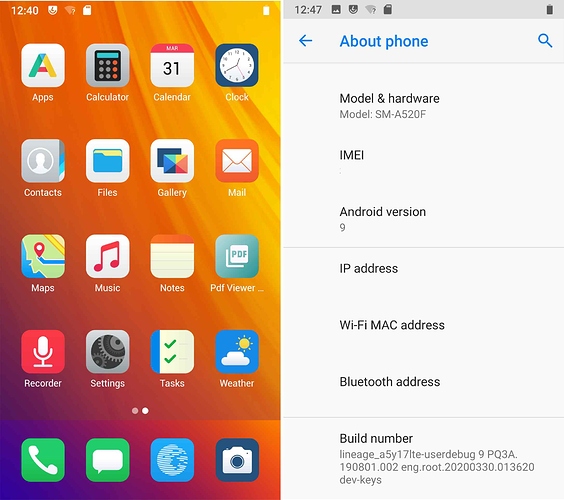 **The new /e/ OS 9-Pie build is not the official build, still in testing ** Unfortunately it comes without an active analog FM radio app. 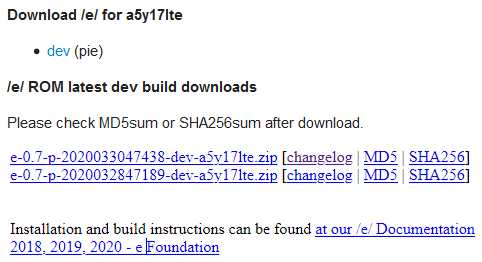 Which were your driver MoDem version (base band version) on nougat before the update, just to see if I’ve the same one or similar ?
Parameters/about phone/base band version near the build number in nougat

You’ve manage to call with pie ?

Thanks for your answer.

A good starting point for the right baseband/modem firmware is the region you live in. If I were you, I would upgrade to e-0.7-pie first. If everything fits, I don’t think it is absolutely necessary to install the latest bootloader/baseband firmware of Android Oreo 8.0.0. But it wouldn’t do any harm at all, except - you would then want to go back to StockROM 7.0 nougat. This is no longer possible, because Samsung wants it so.

You’ve manage to call with pie ?

Yes, why wouldn’t I? After inserting the SIM card and rebooting the system, the mobile network was immediately recognized correctly and the access points (APNs) for Internet and phone were automatically set correctly. Accordingly, telephoning with 9-pie was no problem.

Next I will check all Bluetooth connections thoroughly.

For the call because of this old french thread/post : About base band problem experiment flashing

Otherwise Thank you for your anwser.

Recently flashed this device for elderly father. (Made him use /e/

) His device was still on MM 6.0.1. So did as @archje did and flashed latest stock firmware available (Oreo) with odin. Then proceeded to flash /e/. The whole process with heimdall, TWRP all went super smooth and without problem (using ubuntu). Using the latest /e/ pie build ‘e-0.7-p-2020033047438-dev-a5y17lte’ and so far so good, everything works great.

Hi @archje, so the ROMs that I find with your link are equivalent to Android 9/Pie/LOS16, i.e. coming from a LOS16 device should cause no problems when switching to /e/?