[HOWTO] An unofficial / e / ROM built with Docker – in pictures

Two days back I formatted my PC and had to re installed Ubuntu. After ensuring Ubuntu was up to date I had to install Docker . Thought I might as well document the steps as a number of our users have asked about this on the forum. I also thought of taking some screenshots in case it helps.

Step 1. Setting up the build environment
In short you need a lot of ROM and hard disk space. It will be easier for me to show the specs of my PC 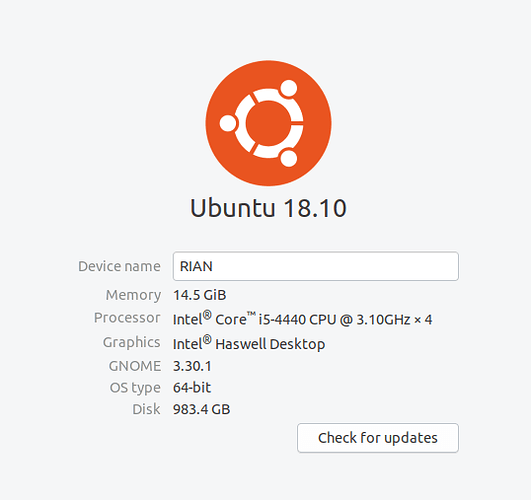 Step 2 : On your PC you need Docker to be running normally

I followed the instructions given at the Docker website and specifically on the Ubuntu page … https://docs.docker.com/install/linux/docker-ce/ubuntu/

I have added the instructions I ran to install Docker from their website and give them here. I copy paste the commands to save time and not make mistakes.

f. Verify that Docker CE is installed correctly by running the hello-world image.

g. At this point if you get an error of access denied it maybe because your user does not have access to run Docker

Step 3 . Getting the latest docker image for /e/ . You will run this command as given on wiki . Please note every time you run a build it is a good idea to run this command to ensure you have the latest image on your PC. A mismatch between this image and the one on the server can cause interesting errors in your build

Step 4. Once this step is complete create the folder structure required for the build. I created a folder under my home / username / e check the screenshot below. You can see a folder named e there.

Step 5. Inside this e folder create sub folders . You can do this all with console command but I am from the world of Windows GUI and like to take the easy way out. It is also easier to explain

Do not make any spelling mistakes …for example cache instead of ccache can create build issues. Docker is very particular that way

Step 6. Now you can start the syncing of the e source code

Run the command in a console as described in the wiki …
There are two changes you need to make . One is the device name of the device you want to build and the second is the branch name. Oreo or nougat/ 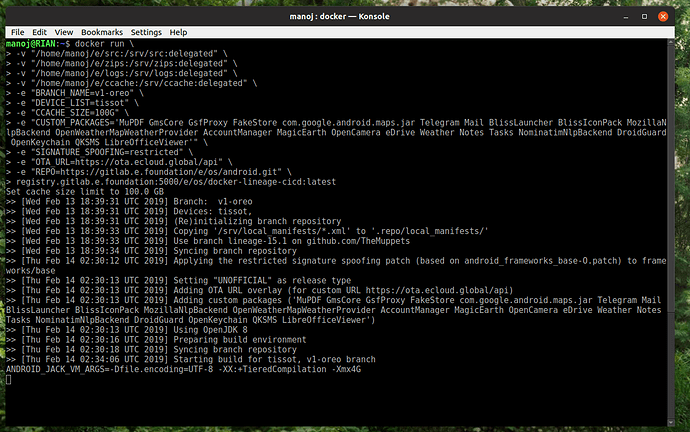 When the build finishes successfully the screen looks like this. 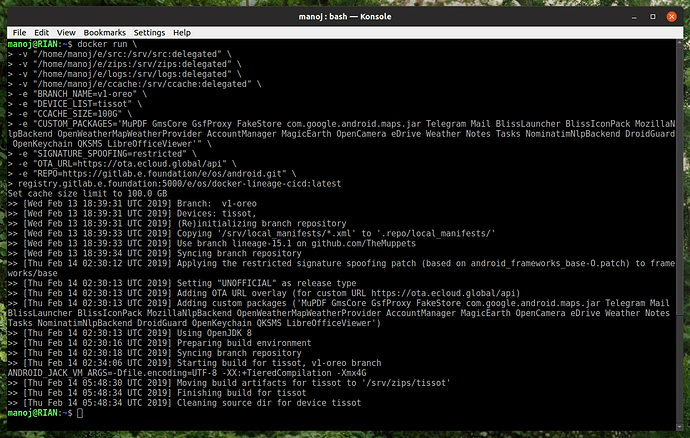 Here you will notice the last three lines mention about what happened to the build. In this case it was successful. You will now find the build in the zip folder.
In case the build fails the message will mention that. Build failed but still clean up the OUT folders ( the folder in which the build is cooked).

The purpose of this post is to share the snapshots of the screen while the build is running just in case you are attempting a build and wondering what Docker is up to. I learnt this the hard way and may have missed a step. Feel free to let me know in there are errors in this post.
Please note : This method work perfectly for Lineage supported devices only.

good work, thanks for the howto

Love it, thank you.
Worked fine in Debian too, package available I used for my first build (don’t do this on Ubuntu, search at Ubuntu itself):
https://packages.debian.org/search?keywords=docker&searchon=names&suite=all&section=all&sourceid=mozilla-search
And a screenshot from https://docs.docker.com/install/

about support in different Gnu-Linux distributions.

Thank you for this tutorial.

Hello, I tried to build the /e/ ROM by following the information in your documentation (https://doc.e.foundation/how-tos/build-e).

Unfortunately, I didn’t manage to run the docker image. I used this command line:

I have the following error:

Could you please help me fix this issue ?

There were some complaints from users that the latest Docker build commands do not work.

To test this I tried out the same commands and it worked perfectly on the very first attempt!!
To be honest I expected a crash as I have a 6 year old PC which has some attitude issues.

All the same the build was successful and I share details of the commands I ran.

Note I change the following :

This is how the build looks once it starts running 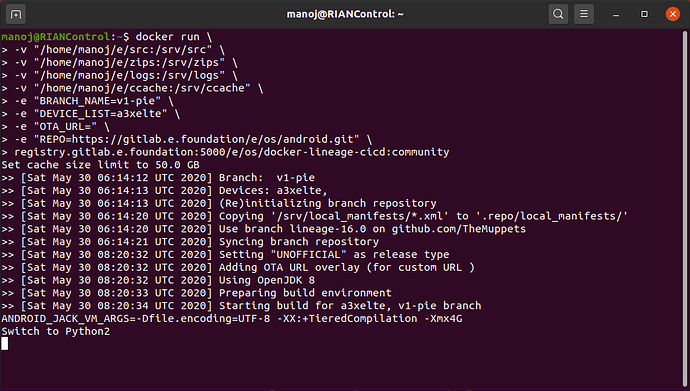 this is only working in ‘community’ image. On ‘latest’ image you have change to DEVICE only and remove OTA line

The ‘latest’ image is no longer to be used. The ‘community’ image is the one that is to be used for Docker.

Ah, OK, that’s why my tries yesterday where failing

This is why Xiaomi devices will not work with Docker now. This ban has been in place for almost a year now. For Xiaomi devices you will have to extract the blobs and then run the builds. Never tried that on Docker but it works on the repo sync way.

Thank you. I should have known to look at the start of the logfile rather than the end

you have 2 posts about the same issue. Pls compress to one, because It’s worst to answer.
And in a HowTo it’s not so good located.
thx

by the way, I have answered on your other post

All Xiaomi vendor sources are available at gitlab/the-muppets

I made a backup just in case of DMCA, but many have already done the same

Haven’t had a look on it. And yeah, I also have done a backup