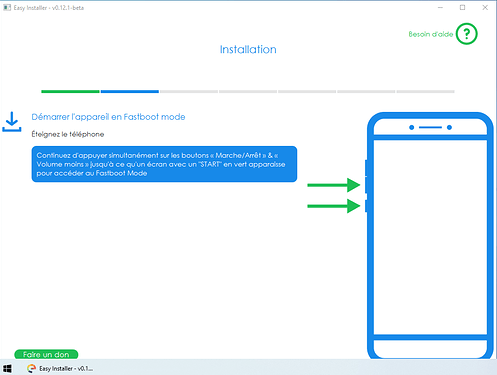 If so, follow these few steps to unblock the situation. You don’t need to unplug your Fairphone 3/3+, but if you did and you can’t get anything or are lost, press a volume button to scroll through the available options (Start / Restart bootloader / Recovery mode / Power off) until you get the green Start, then click the Power button to validate and to restart your Fairphone 3/3+. Then restart the Easy Installer and repeat the installation procedure, then resume this tutorial.

When I do that, I cannot find the “SAMSUNG Android Phone” on the list. Neither a “Android Device” like it’s said here… I tried with “Mobile devices” but when I validate the ssudadb.inf, I get a error message : “the folder you specified doesn’t contain a compatible software driver for your device”.
Do I need to do anything after extracting to create the Samsung category ?

By any chance, would you have an idea ? It’s blocking my easy-install ^^’

Hello, and welcome in the forum

I have maybe another idea, that is easier.

Could you go to Windows settings, in the Windows update tab please ? Click on refresh to search for updates.

It will maybe install the needed drivers.

If it doesn’t, maybe you will see a “Optional updates” button (or simliar), click on it and click on the “drivers” part to display the list if installable drivers. You might see a “Google Inc. K??? Android Bootloader Interface” driver. Install it.

And IT WORKED.
With the Fairphone on Fastboot I searched for the updates and there was “LeMobile - Other Hardware - Android Composite ADB Interface” > I installed it and the installer continued !
/e/ is now installed, the adventure begins.

Thank you very much for this post - I was very grateful to find it as my Fairphone 2 is not restarting after trying to update the OS through the Fairphone Updater. I am now in fastboot mode, but Win 10 Home does not recognise my phone at all, which makes both backing up data and reinstalling the OS impossible.

UPDATE: We tried it on my husband’s computer, and the Samsung Android Bootloader Interface driver was shown and installable there from the package. Much appreciated!

Thank you very much,

This is a great fix.